The Weirdest Near Misses ... Some Guidelines For Mitigating Hazards Posed by Gas Cylinders 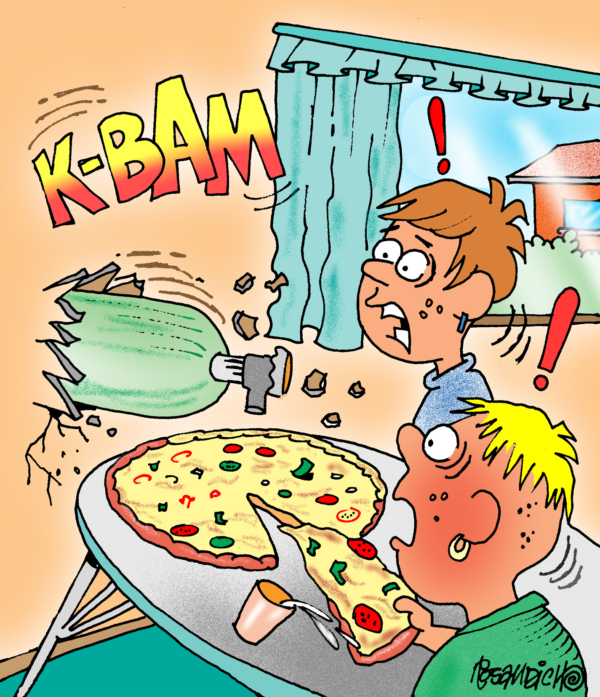 I was thinking about some of the weirdest incidents that I have witnessed, and this includes two that involved compressed gas cylinders.

Now before you protest that you are in compliance with hot work issues, etc., think beyond the welding gases and the oxidizers to the securing of any gas cylinders: argon, nitrogen, etc.

About 20 years ago I saw a local news story in a small town about how an unsecured gas cylinder valve was hit and the cylinder took off like a missile.

The cylinder traveled across the street and ended up lodged in the kitchen wall just as two teenagers sat down to eat pizza in their kitchen.

No one was hurt, but it was a close call.

Lots of things had to be wrong for this happen.

The cylinders were not secured; the valve did not have the cap on securely (usually closed is considered six turns of the cap); and there had to be a long gangway or aisle, so that the cylinder did not hit anything or anyone.

I believe that the contents were an inert gas in this case.

The second curious event was one of the maintenance staff flagging me down to inform me that we had an acetylene bottle with a leak near the valve.

Needless to say, that got my attention.

The person who discovered the problem acted swiftly and got the bottle to an isolated area, secured it, and posted NO SMOKING signs, as well as signs warning of the leak.

You actually could see the acetylene escaping in a little vapor cloud.

The manufacturer/welding service was contacted, and it took over the controlled release.

No one was hurt.

What Made the Difference?

Why were these near misses and not accidents?

Either of these stories could have been much worse.

The two kids eating pizza were just plain lucky as was the person who hit the valve.

In the second case, an alert employee who had been trained knew what to do with a leaking bottle, and he took immediate action.

The cylinder was isolated and secured, and no one was hurt.

It is critical to look for the unusual and learn from the near misses.

In OSHA 1910.101, which refers to Compressed Gas Association (CGA) pamphlet S-1.1-1963, securing a cylinder is a performance-based measure.

The guidelines provided in CGA pamphlet P-1-1965 and in other more recent versions of the pamphlet describe how care is to be exercised to ensure that cylinders are secure.

For a cylinder to be secure, it must not be allowed to drop nor be transported in a way in which it could strike another object.

Cylinders should neither be dragged nor rolled in the horizontal position.

There are multiple options to secure and transport a cylinder.

A suitable hand truck, forklift truck, cylinder pallet system, or similar material-handling device may be used with the container properly attached to the device, which can protect the cylinder from being damaged by preventing it from being struck by other objects or falling out.

Determining whether a cylinder has been secured in accordance with the CGA Pamphlet P-1-1965 would be considered on a case-by-case basis.

Flammable gas cylinders and oxidizer cylinders must be separated by 20 feet or by a noncombustible barrier 5 feet high with a fire resistance rating of at least one half hour.

Do not allow ignition sources such as lit cigarettes or lighters in the area.

Sparks or flames should never be permitted to come in contact with any part of a compressed gas cylinder.

Store cylinders in an assigned place away from radiators, elevators, stairs, or gangways.

These areas should be set up to protect cylinders from being knocked over or damaged by falling objects, tampering, or anything that could ground electrical circuits.

Exits shouldn’t be blocked for any reason.