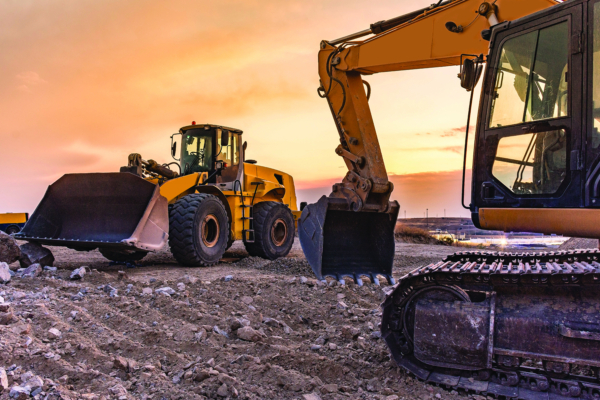 Gil Maier, general manager at Northern Star Farmers Cooperative is working with long-time construction partner Ernst & Sons Construction on a project to add four steel storage tanks and a receiving leg at the coop’s branch elevator in Pottawatomie. It isn’t quite the first day of spring yet, but unseasonably warm weather had softened the soil at Pottawatomie, and excavation work has begun. A less welcome meeting involves Elliott Godfrey, head of marketing for the Chicago, Dubuque & Western short line railroad, a character Gil finds unsavory. Elliott hints he can get Class I railroad service for Northern Star if Gil agrees to share payments made to an offshore bank account. Gil sends Elliott away.

Gil wondered about Elliott’s implied threat: “How long do you think you can keep that grain in storage before it starts to smell?” To Gil, the only thing smelling was the scent of the shady sales guy who had just vacated his office.

Besides, if Gil really needed to empty a tank, he could count on his merchandiser, Kate Swenson, to find a profitable home for the contents.

Gil was glad he had given Kate a second chance to prove her worth. After her roommate, Patti, was discovered to be the person behind the poisoning death of Benjamin Alsup, Northern Star Board Chairman Bob Alsup’s wayward brother, many places would have fired her or even turned her over to the police as a suspected accomplice. But Gil thought better of Kate and kept her on for a six-month probation, during which Kate turned out to be a skilled, reliable, and most importantly, honest merchandiser. Patti, who had been abusive toward Kate, was well forgotten. Gil even increased her pay so she could move out of that walkup studio apartment on Main Street into a nicer place on Second Avenue.

Thinking of her, Gil went to the DTN website to check the day’s markets. And was interrupted by the phone.

It was Harold Ernst, the contractor on the Pottawatomie project. “Yeah, Harold.”

“You’d better come over here right away,” he said. “We’ve found something that’s got us shut down.”

“What could that possibly be?” Gil asked.

“You’re going to have to see this,” Harold said. “It’s better to do this in person. Oh, and bring your operations guy, Johnny, with you.”

When it comes to a construction project, it made good sense to include operations personnel. Gil looked at his desk calendar. It was pretty quiet for today, so he wouldn’t necessarily be missed around the office.

Gil stopped by Connie’s desk and told her he would be out at the Pottawatomie elevator. “Have you seen Johnny? I need him along.”

“I think he’s out in the shop,” Connie said.

One of Gil’s first projects after taking over as general manager from the disgraced Ole Torvaldsson was to turn an old unused shed on the property into a small machine shop. It was nothing fancy, no CNC programmable stuff. The turning lathe and the old Bridgeport mill looked like machine tools the old timers remembered from their high school shop class. But to a skilled machinist, they turned out parts every bit as good as the modern computerized units. It just took a little longer.

Gil found Johnny Littlefeather rummaging among some cutting tools in the back of the shop. “I think maybe I can get that old speed reducer on the number 14 belt working correctly again,” the operations manager said. “Just have to get the threads on this bolt right. It’s a size they don’t make anymore.”

“Ancient Mesopotamian, far as I can tell,” Johnny replied.

“Look, I need you to drop that for now. Harold Ernst wants us out at the construction site.”

“What for?” Johnny asked.

The operations manager sighed, knowing that he’d have to go. Harold Ernst wasn’t the sort to call you out to a job site unless it was important.

The two men walked out to Gil’s pickup and headed for Pottawatomie, about eight miles by county blacktop from Monrovia. North central Iowa is usually lush and green for much of the year, but in the late winter, before things thaw out, it was as barren and desolate as anywhere Gil knew. Flat, mostly treeless country, big hunks of black soil holding patches of earth-stained snow in place. The dashboard thermometer showed the temperature at 38 degrees, just warm enough to turn most fields into a muddy mess, if you were foolish enough to go out there.

There wasn’t much to see at the north end of the Pottawatomie elevator’s construction site as of yet. A medium-size yellow backhoe had dug a small hole about 10 feet deep into the Nicollet prairie soil for the first of the four tanks to be built. A front-end loader sat parked nearby. It wouldn’t be used until the excavation was large enough to provide it enough room to work, including a dirt ramp to get into and out of the hole.

Harold was there with his son, Barry, a young man in his 20s, and a couple of the company’s heavy equipment operators.

“So what is this about?” Gil asked.

“Well, to start with, this,” Harold said. He dropped a couple of stone arrowheads into Gil’s hands.

“OK, so you dug up some arrowheads,” Gil said. “Give them to one of your nephews. They’d probably appreciate it.”

Gil automatically handed them to Johnny. “Do you recognize the tribe?”

Johnny looked at them for a moment. “Not really,” he said. “Yeah, I’m a Sioux, sure, but these could be from any nation, really. I don’t necessarily recognize it. This is the 21st century. I do my deer hunting with a shotgun, just like anyone else.”

“Is this all you called us away for?” Gil asked the contractor. “A couple of arrowheads? You find these all over.”

“Well, no,” Harold said. “We set up a ladder down into the excavaion. Take a look for yourself.”

Gil lowered himself onto the ladder, then carefully climbed down, while Johnny stood at the hole and watched.

“You might want this,” Barry said, handing Gil a flashlight.

Gil stepped off the bottom of the ladder and looked around the pit with the flashlight. Catching his attention almost immediately were two log-shaped objects sticking out of the wall of the pit, discolored a deep brown, maybe from the soil or perhaps from age. It took a few seconds before it dawned on Gil what he was seeing. They were bones. Human bones, maybe hundreds of years old.

“Johnny, you need to come down and take a look at this,” Gil called up.

“I can see it fine from up here,” Johnny said. “And no, I’m not coming down there. You need to come up here.”

Gil shook his head, confused, but he climbed out of the hole. Harold took Gil’s arm to help him step up onto the surface.

“It’s sacred ground,” Johnny said. “That’s why I wouldn’t climb down. I don’t know if those bones are Sioux or Winnebago ... they could be from any number of nations who lived here or passed through. But Harold is right. We’re shut down.”

“So are you telling me we can’t build here? Maybe to the south of the elevator?” Gil asked the contractor.

“Well, not forever,” Harold said. “But I went to a workshop on this a couple of years ago. If we want to continue, we’re going to need a permit from the Office of the State Archeologist over in Iowa City. They’ve got to file a bunch of stuff. There’s an Indian Advisory Committee, and the state health department has to weigh in.”

“Yeah, because it’s a human corpse, even if it’s been laying there undisturbed for hundreds of years. It’s government. Go figure. Then, they send some archeologists over to dig out the remains, pack them up for cataloguing and testing, whatever they do, and the tribes make sure they’re all reburied with respect. Like, you know, the way you’d want your relatives treated. Then you get your permit.”

“Well, not even then. You have one of those archeologists on site the entire time supervising everything and looking at every shovelful of dirt, at least until the excavation is done. It’s a pain, for sure, and I hope you don’t expect this to be ready in time for harvest.”

“How long will it take to get this permit?” Gil asked.

“I don’t know, because I’ve never had this happen,” Harold said. “Probably faster than a court case. But it’s the government, so who’s to say?”

“Well, we’d better contact the state and get this started,” Gil replied.

“I already made the call,” Harold responded. “There’s at least a day’s worth of forms to fill out waiting for me on my computer back at the office.”

Gil just shook his head. “The coop board isn’t going to be real happy about this.”

“I wouldn’t worry too much about it,” Johnny said. “This is important. You wouldn’t dig up a township graveyard to build some storage tanks. I’ll use my background to do whatever I can to smooth things over with the board members or maybe even speed things up with the state.”

Harold’s cell phone rang. “I’d better take this,” he said, and Gil and Johnny walked over next to Gil’s pickup out of Harold’s earshot.

“I didn’t realize you felt so strongly about this,” Gil said to his operations manager.

“Well, I’m no radical like the American Indian Movement people,” Johnny said. “But they are my people if not my tribe, and I want to see them treated with respect. Besides, it’s the law, and we all know that whenever you try to bypass the law to make a project go faster, it winds up taking a lot longer in the end.”

Harold walked up to the two men. “Well, it’s going a little faster than I expected. The state will be sending a team of archeologists to remove the bones and check over the site the day after tomorrow, weather permitting. The leader of the team is a professor of archeology at the University of Iowa who works for the state on the side, and he’ll have a couple of graduate assistants with him.”

“Maybe we can get this started back up after that,” Gil said, hoping that wasn’t wishful thinking.