This article is summarized from a presentation by Martin Oberman, vice chair of the federal Surface Transportation Board (STB), Washington, DC (202-245-0238). He spoke via audio connection during a Transportation and Technology Open Forum on March 9 during the National Grain and Feed Association’s 2020 convention in Austin, TX. 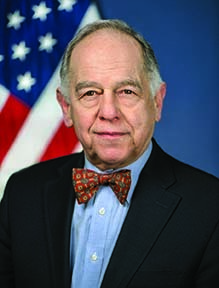 One of my top priorities for the STB is to encourage competition among railroads.

The Staggers Rail Act of 1980 has resulted in a tremendous amount of consolidation among railroads, so that now, many shippers have only one rail carrier available to serve them. The STB wants to have freight set by market competition rather than government regulations, but the Board has a mandate to avoid too much concentration of market power.

I believe that sound national transportation policy requires putting as much freight as possible on rail rather than the highways. There are situations where trucks are the only choice, but there also are many situations where there is no good reason to put freight on trucks, and that’s not good for the environment.

Over the next 25 years through 2045, the volume of freight in the United States is expected to increase by 60%. By then, every 1% shift from trucks to rail will eliminate 65 million truck miles.

Congress has mandated that the STB establish a simplified and expedited methodology to deal with challenges over the reasonableness of rail freight rates. The understanding is that if the STB doesn’t simplify the methods to challenge a rate, smaller shippers would be shut out.

Over the next 25 years through 2045, the volume of freight in the United States is expected to increase by 60%. By then, every 1% shift from trucks to rail will eliminate 65 million truck miles.

Since 1996, only 51 rate cases have been filed with the STB, and of those, 11 have been found for the shippers. Almost all of the cases were filed by the coal and chemical industries.

An STB task force in 2019 issued a lengthy report on potential rate case procedures. Two of the main proposals currently being considered as a result of that report are:

• A possible “final offers” procedure that restricts the amount of litigation shippers and carriers could engage in and requires the STB to issue a decision on rate challenges within 135 days, a little over four months.

• A streamlined approach for pleading market dominance in rate cases when a complainant can show it meets specific factors.

Final decisions in those rulemakings are not expected soon, but I hope we will have something this year.

My view under the statute is that railroads are supposed to utilize demurrage charges for shippers to load and unload trains as quickly as possible. Problems occur when there are events that are out of a shipper’s control, such as a snowstorm or even railroad equipment problems, but the shipper still is held liable for demurrage.

Key principles behind the STB’s two open proceedings, a policy statement and a rulemaking, include:

Final decisions in those (rate challenge) rulemakings is not expected soon, but I hope we will have something this year.

• Demurrage is charged when the shipper has the ability to load a train on time but fails to do so, but shipper should not be charged when events causing demurrage are out of the shipper’s control.

• Receivers often get the demurrage bill when the train isn’t unloaded on time, no matter the cause. The railroads should not bill for demurrage unless the bill is justified.

The board also recently finalized a rule clarifying that, for non-intermodal transportation, the regulation of demurrage is not exempt from review by the STB.

The board also is concerned with problems arising when railroads detail privately owned cars for an extended period of time. The current proposals do not address this issue, but the board may address it in the near future.