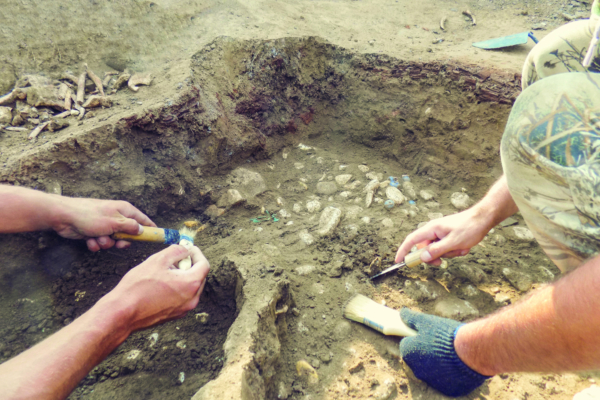 After seeing apparent Native American bones dug up as part of an excavation project by Ernst & Sons, a construction contractor, Gil Maier goes in search of Pottawatomie Branch Manager Chris Aschermann. Chris is known to have some racial prejudices against Native Americans and is on poor terms with Northern Star Superintendent Johnny Littlefeather. Gil finds Chris at a tavern in the village’s downtown block. Gil tells Chris he expects the branch manager to be back at the elevator the next day, alert and sober, when a state archeological team is supposed to show up to remove the bones for analysis. On his way back to Monrovia, Gil is pulled over by the county sheriff who tells Gil he had some information.

“Mind if I come in?” Sheriff Johnson asked and immediately started around for Gil’s passenger door.

“Sure,” Gil said, noting that the sheriff apparently now felt comfortable enough with Gil to invite himself on in.

“I’ll just be blunt,” Tom Johnson said. “We’ve got some trouble brewing up for you around Pottawatomie.”

“What sort of trouble?” Gil asked. He had a hard time imagining any trouble in a place as tiny and quiet as Pottawatomie.

“We know about the native bones you guys dug up at the north end of the elevator,” the sheriff said. “Don’t look surprised. This is a small town in a small county, and we keep a deputy over there full time for the village and the township. Word gets around.”

Pottawatomie was too small a village to have its own police department, Gil knew. The township surrounding the village, which had a little bigger budget, had a contract with the county for the sheriff’s department to take care of its policing, including the village.

“Anyway,” Tom continued, “we just got word from the state police that there’s a big protest demonstration planned at your construction site the day after tomorrow. The protestors have already filled up all the motels around Clear Lake and Mason City, a few other towns, too. And a bunch of them have campers, tents, and whatnot, and they’ve filled up the campgrounds at both of the state parks around Clear Lake. My counterpart up in Cerro Gordo County is having fits.”

“Now, wait a minute,” Gil said. “Hardly anyone knows about this. Heck, we don’t even know if they really are Indian bones, or some early settler, or even some kind of animal. The state archeology team is coming up tomorrow. I can understand how you might have found out about this. But a bunch of protestors? How would they know this fast? We haven’t had any contact with the local media, much less the big guns out of Des Moines or Minneapolis. How would they have found out? I’m sure my staff hasn’t spoken to anyone about this.”

“He’d be the last one to tell any outsiders about it,” Gil replied. “He dreads the idea of demonstrators all over our property, and he’s no sympathizer to native Americans.”

“I’ll ask him about it,” Gil said, “but I’d be surprised. He thinks the ground might be an ancient burial site, but he’s also a professional. I can’t imagine him going behind my back to do something like that.”

“What about the archeologists?”

“I don’t see what they would have to gain by it,” Gil said. “I doubt they’d be happy with protestors or the media interrupting their work.”

“Don’t they have a native American advisory board overseeing their work in these cases?” Tom asked.

“That’s what Harold Ernst says, and he’s studied up on the law,” Gil noted. “I suppose it might be one of them. The state office probably would have to notify them. But I still don’t see how a protest could have been organized so quickly. It’s almost as though someone knew that the bones were there, and I don’t see how that could be possible.”

Listen to How It All Began: "Northern Star I"

The sheriff was quiet for a moment. “That is quite a puzzler. I’ll make some calls and see what I can come up with,” he said. “In the meantime, you’ve got those archeologists coming up tomorrow from Iowa City. Maybe they can tell you something.”

“What about this protest?” Gil asked. “Is there any way to put a stop to that?”

“Sorry, First Amendment.” Tom replied. “They have a right to be there, as long as they’re peaceful. Don’t worry. We’ll be there watching things. The minute any one of them breaks the law, they’ll be subject to arrest.”

“Don’t mention it,” the sheriff replied. He opened the passenger door to get out of Gil’s pickup. “Gotta go. I have a meeting with the principal over at River Valley High. Drive safe!”

Gil put the coop truck in gear and headed back into town. He pulled into the elevator driveway off Railroad Street and noticed that Johnny’s motorcycle was parked by the office. That was good, since Gil needed to speak to Johnny.

He asked after Johnny and was told the superintendent was up on the roof doing some maintenance on a drag conveyor. Gil walked over to the elevator, summoned the manlift, and rode it to the top.

Johnny Littlefeather was kneeling next to the main overhead drag and appeared to be working on the drag chain. Several white polyurethane flights were laying on the rooftop floor next to him.

“Hey, Gil,” the superintendent said in greeting. “After I got back, Elliott Godfrey came around looking for you. I told him you were out, and I didn’t know when you’d be back.”

“Thanks for small favors,” Gil said, glad to have missed the railroad salesperson.

“No kidding,” Johnny said. “I thought I’d come up here and do some maintenance that needed to be done. If he comes back, he probably won’t go up the manlift looking for me.”

“Hey, I just had a conversation with the sheriff,” Gil continued.

Johnny looked up at the general manager. He knew that Gil was on friendly terms with the sheriff, unlike the city police chief.

“Sheriff Johnson says people are gathering from all over to hold a protest demonstration at Pottawatomie the day after tomorrow at the site where we found those bones. Do you know anything about that?” Gil asked.

Johnny looked genuinely surprised. “No, this is the first I’ve heard of anything. Do you think there might be native Americans coming over?”

Gil trusted that if Johnny said he didn’t know about anything, that was the truth. “I don’t know for sure, but I imagine at least some of them are natives.”

“Just wondering,” Johnny said. “I have a cousin, Willy, back in South Dakota. He gets involved in a lot of that political stuff, Me, I’m mildly interested, but I’ve never had the time to do much of that myself. Some of that stuff is enough to drive you to drink.”

Gil gave a little smile. Johnny was known around town as much for the “Friend of Bill W” bumper sticker plastered on to the side of his Harley, the Alcoholics Anonymous slogan, as anything.

“You haven’t told anybody about this yet, have you?” Gil asked.

“No, please, let’s keep this confidential,” Gil told the superintendent. “Don’t worry. We’re going to follow all the regulations by the book. I’m leaving this in the hands of the state.”

“No, I’ll keep it to myself,” Johnny said. “Like I told you over there, I regard that as sacred ground, but as long as we’re doing what we’re supposed to, there’s no reason to have a ruckus out there.”

“OK, I trust you on this,” Gil said. “Do you need anything on this conveyor, any help?”

“No, I think I’ve got this covered,” Johnny said and went back to work.

Gil walked over to the edge of the slip and looked down at the office. He recognized every car and truck in the lot. No sign of Elliott Godfrey or anyone who looked like a sign-waving protestor. Good.

He went back down to his office. The rest of the day was quiet, and Gil got a remarkable amount of paperwork done in the remaining hours.

Thursday dawned sunny and a little chilly. Gil checked in with the office, told them his plans, and drove straight out to Pottawatomie. He had some software that allowed him to access his office computer remotely from a workstation at the branch elevator. From that, he could monitor stored grain temperatures and other hazard sensors, as well as the futures markets.

At Pottawatomie, Gil saw that a small SUV in Iowa Hawkeye colors was parked at the site. A middle-aged man along with a young man and young woman were unloading equipment from the van, mostly manual tools like shovels, brushes, and specimen trays.

Gil walked up to them. The older man broke off and extended a hand to Gil. “Hi, I’m Dr. Elwood Connolly from the state archeology bureau. I also teach at the university, and these are two of my graduate students, Cathy and Stuart. They waved, and Stuart called out “Pleased to meet you.”

“I’m Gil Maier, general manager at Northern Star Cooperative. Has our branch manager, Chris Aschermann come out to meet you yet?” Gil spotted Chris’ pickup near the office.

“I’ll have him come out when he gets a chance,” Gil said. “In the meantime, is there anything we can do for you?”

“Thanks, but we’re fine,” the professor said. “This is fine, painstaking work, so the biggest thing is just to keep out of our way. In fact, you’ll need some patience. Often, this type of job takes several days to complete.”

“If it would be helpful, I could have our backhoe operator come out. He can move a lot of dirt quickly.”

“Oh, please, no!” Elwood replied. “Sorry, but human remains are very fragile, and it’s very easy to damage them if you apply too much force. We need these remains as intact as possible, before we take them to the lab for analysis.”

“Oh, Mr. Maier,” the professor quickly added. “Have you heard anything about protestors being out here tomorrow?”

“If that happens, we’ll probably leave the site for safety reasons until everything is over,” Elwood said. “Please try to keep them away from the burial site. They want the same thing as we do, protecting the site and the remains out of respect.”

“Yes,” Gil replied. “We’ll put up some fencing around the pit, if that happens. We don’t want to be liable for someone getting hurt. and hopefully that will do the trick.”

“Thanks,” the professor said, as the graduate students climbed down the ladder into the excavation.