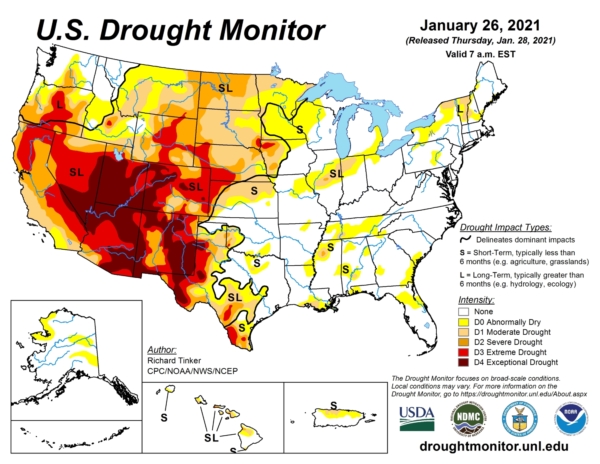 Precipitation was plentiful across the United States for the week ending Jan. 26, according to the U.S. Department of Agriculture (USDA)'s Jan. 28 Drought Monitor report.

Yet areas remaining dry stretched along the northern tier of states from the Cascades through New England, most of the Intermountain West, the High Plains, southern Texas, Florida, the southern Atlantic Coast, the northern Ohio Valley, and the middle Atlantic States.

The heaviest precipitation last week fell on a swath across southwestern Kentucky and immediately adjacent locales (3.0 to 4.5 inches), and the higher elevations of Arizona (3.5 to locally over 6 inches).

Moderate to heavy amounts of 1.5 to locally 4.0 inches pelted the rest of Kentucky, southern Missouri, northeastern Arkansas, just north of the central Gulf Coast, and patchy areas across southern Virginia and the interior Southeast.

Similar amounts dotted southern California and the higher elevations of the southern Sierra Nevada and the Four Corners region, especially across Arizona.

Much of the precipitation fell as heavy snow late in the period from Kansas and Nebraska to the lower Great Lakes.

Amounts topped one foot at scattered spots across southwestern Iowa and southeastern Nebraska, with Omaha, NE reporting just under a foot.