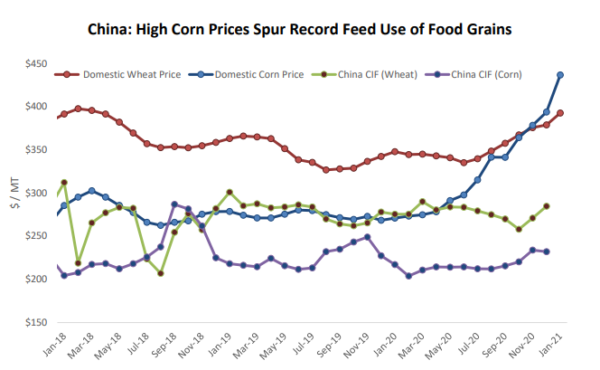 With record corn imports forecast this month at 24.0 million tons for 2020/21, China’s demand for feedstuffs continues to rise as its swine herd recovers from African swine fever, according to the February USDA Foreign Agricultural Services Grain: World Markets and Trade report.

High corn prices are supporting record feed use of wheat and rice. Although primarily consumed as food grains, feed use of these grains is rising with increased availability of old-crop wheat and rice from auctions at prices competitive to domestic corn.

China’s 2020/21 wheat nonfood use (feed and residual) is forecast at a record 30.0 million tons, more than 10 million higher than the previous year due to record auction volumes of domestic wheat and stronger compound feed production.

High domestic corn prices have helped to drive these record auction volumes, with more than 12 million tons reported as sold in January.

Beginning in December, domestic wheat prices trended below corn for the first time in more than 6 years (based on the national monthly average spot price).

China wheat imports are raised for the sixth consecutive month to 10.0 million tons, the highest level in more than 25 years.

Although most wheat imports are allocated towards human consumption, their relatively low import prices compared to China’s domestic corn prices make wheat attractive for feed use in China’s southern region.

France has been the largest supplier for the first half of 2020/21, with landed prices averaging $270/ton, more than $160/ton lower than domestic corn and $120/ton less than domestic wheat.

This price spread continues to support stronger feed use of wheat and spur imports.

Sign up for Grain E-News delivered to your inbox each Thursday.