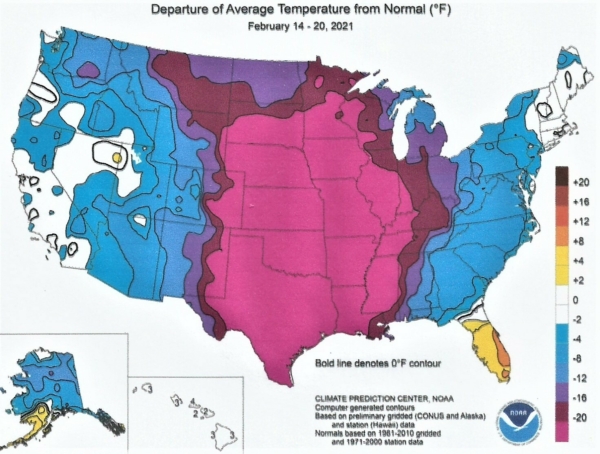 Storm- and cold-related issues, such as power outages and travel disruptions, plagued the northwestern and south-central United States, according to the Feb. 23 Weekly Weather and Crop Bulletin from the U.S. Department of Agriculture.

Cascading impacts later included shortages of potable water, most notably in Texas, where cattle producers fought through snow, bitter cold, and feed and water shortages to save animals, while some dairy and poultry operations contended with lack of power and heat.

However, concerns existed with respect to winter wheat in areas where a protective snow cover was shallow or lacking.

Wheat areas exposed to potentially damaging levels of cold weather including portions of the northern and central Plains.

Elsewhere, producers continued to monitor freeze-affected southern crops, such as citrus and vegetables in Texas, as well as sugarcane in Texas and Louisiana.

As the shocking blast of cold air across the nation’s mid-section persisted through a second week, weekly temperatures averaged at least 20 to 30°F below normal from the central and southern Plains to the middle and lower Mississippi Valley.

Late-week temperatures began to rebound across the Plains, favoring coldwave recovery efforts such as infrastructural repairs.