The report also provides expert economic analysis on how the coronavirus pandemic may impact the industry’s growth over the next five years.

“Our study now includes new ingredients, such as forages and other roughage products, and species, such as dogs and cats, to provide the most accurate picture of the enormous volume of animal food consumed annually.”

Decision Innovation Solutions (DIS), the economic and analysis firm that performed the study, found that in 2019, the industry’s 5,836 manufacturing facilities produced at least 283.8 million tons of animal food.

Nebraska, which held the No. 3 spot in the previous report, dropped to the sixth spot in the 2019 report due to lower cattle numbers, whereas California moved up into the third spot due to its increases in dairy and beef cattle numbers and broiler chicken production.

Corn, the most abundantly produced crop in the United States, made up slightly more than half (52%) of the total amount of compounded feed consumed and when combined with soybean meal (12%) and dried distillers’ grains with solubles (DDGs) (11%), represented more than 75% of all feed tonnage consumed in 2019. 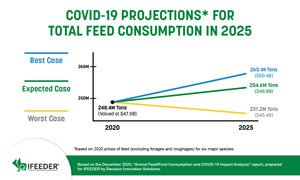 Using the U.S. Department of Agriculture’s (USDA) November 2020 data, DIS established a baseline of the value and volume of feed for six major categories of livestock and poultry (i.e., broilers, layers, turkeys, hogs, dairy cows, and beef cattle) and then provided three, forward-looking scenarios for the feed sector based on COVID-19's impacts.

DIS estimated the baseline consumption at the beginning of 2020 at 252.6 million tons (excluding forages and roughages) with an estimated value of $66.7 billion, under normal production circumstances without the effects of the pandemic.

With COVID-19, the projected consumption rate fell 1.7% to roughly 248.4 million tons, a difference of 4.2 million tons less feed consumed worth $1.6 billion, leaving the industry with a total post-COVID-19 value of $47.5 billion.

In a worst-case scenario, where the industry encounters further disruptions in processing and slaughter numbers or potential trade issues, DIS estimated 2025 animal food production could further decrease 4.5% to 237.2 million tons at a value of $45.4 billion.

In an expected-case scenario, where the industry continues business as usual without any further major disruptions, DIS estimated that by 2025 animal food production could increase 2.5% to 254.6 million tons worth roughly $48.8 billion.

In a best-case scenario, where the hotel, retail and institution sectors of the economy recover quickly and travel and trade conditions dramatically improve, DIS estimated that by 2025 feed production could increase 5.9% to 263.1 million tons, valued at $50.4 billion. 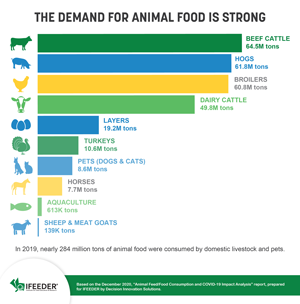 “The demand for animal food is strong and continues to grow, despite the COVID-19 pandemic,” Cooper said.

“While we may feel some of the short-term economic repercussions and disruptions to the food chain from the coronavirus pandemic, our industry is resilient and well-positioned to continue supporting America’s food and pet food supply for the future.”

"This report demonstrates that supporting our essential agricultural workforce with better access to COVID-19 prevention tools, testing, and vaccines in rural America will have a positive impact on our long-term economic growth and contribution to local economies.

"Our industry has responded and adapted very well to the new way of safely operating during the crisis and our local and state policy leaders can show their support by continuing to prioritize these workers in their vaccine rollouts and COVID response plans.”

The full report, data, maps and graphics can be found at ifeeder.org/feeddata.

AFIA: What the COVID-19 Pandemic Has Taught U.S. Feed Industry