In the 2020 calendar year, more than one out of every three metric tons of distiller’s dried grains with solubles (DDGS) leaving the United States headed for ports in Southeast Asia and Oceania, illustrating how increased marketing efforts in the region by U.S. Grains Council (USGC) have paid off despite the emergence of both African Swine Fever (ASF) and COVID-19.

“The Council has been working on the ground here in Southeast Asia and Oceania for over a decade, expanding DDGS sales by providing technical expertise and connecting grain buyers and end-users with U.S. suppliers,” said Manuel Sanchez, USGC regional director for Southeast Asia.

“As a result, U.S. DDGS demand in this dynamic region has increased significantly across all major markets in Southeast Asia.

“Today, U.S. DDGS is one of the most widely used feedstuffs in animal feed diets across Southeast Asia.

"The nutritional value makes it an excellent source of energy and protein and a great source of amino acids and phosphorus compared to most other feed ingredients.”

Despite the region experiencing major market-disrupting phytosanitary events in 2017 with the closing of the Vietnam market due to a quarantine pest finding and the 2019 near-closure of the market in Thailand due to the same insect occurrence, the Council was able to bring together industry stakeholders to ultimately resolve these issues and maintain the overall trajectory of U.S. DDGS into Southeast Asia. 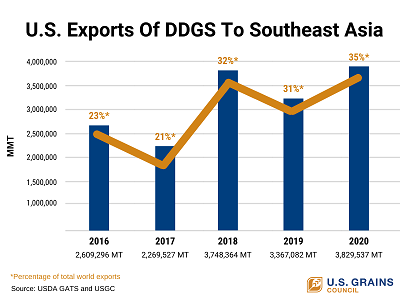 Five of the 10 largest DDGS export markets are now in Southeast Asia: Vietnam, Indonesia, Thailand, the Philippines and New Zealand. Mexico, South Korea, Turkey, Japan and Canada round out the top 10.

Reasons for the uptick in U.S. DDGS purchases vary by country.

In Indonesia, the Council expanded engagement to reach more broiler and layer producers spread over the country's extensive network of islands and, as a result, participants began DDGS trials and increased inclusion levels that increased demand.

Phytosanitary hurdles in Thailand notwithstanding, Council staff members are working on targeted technical education and trade servicing programs focused on inclusion of DDGS in shrimp, fin fish and marine species.

“There is still plenty of room for growth as animal protein consumption continues to expand in the region,” Sanchez said.

“We have recently begun focusing our market development efforts in both the aquaculture and dairy sectors in Southeast Asia - the next significant demand growth opportunities for U.S. DDGS.”