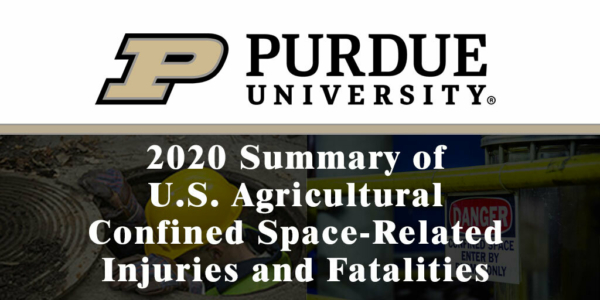 A minimum of 35 grain-related entrapments were documented in 2020 in an annual report released in mid-March by the Agricultural Safety and Health Program at Purdue University.

Of those, 20 cases ended in fatalities, and 15 were non-fatal.

The number represents a 7.9% decrease from the 38 entrapment cases reported in 2019.

The 35 entrapments documented in 2020 were higher than a running five-year average (31.0 cases per year and was the sixth highest of the past six years.

Nevertheless, the five-year average continues to drop from its peak of 40.4 in 2011.

Of the 2020 entrapments, 57% ended in a fatality, a rate higher than the five year-average.

The state with the most number of grain entrapments in 2020 was Illinois with 10 cases.

Overall, entrapments were documented in 11 states, the majority of them in the Midwest.

Subscribe here for Grain E-News delivered to your inbox every Thursday.

All grain entrapment cases involved males, none of them under 21, which had accounted for nearly one in five cases in the past.

As of the end of 2020, the Purdue Agricultural Confined “Space Incident Database contained 2,404 documented incidents dating back to 1977.