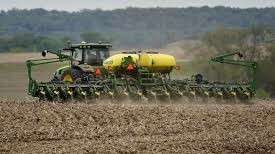 But according to today's Weekly Weather and Crop Bulletin from the U.S. Department of Agriculture, drought-affected areas also dealt with a high-wind event, as well as limited soil moisture for rangeland, pastures, winter grains, and newly planted summer crops.

North Dakota led the nation on April 4 with the least amount of topsoil moisture with a rating of 92% "very short" to "short."

Elsewhere, lingering showers and thunderstorms occurred in late March in the eastern U.S. Across the interior Southeast, including the Tennessee Valley and environs, the early- to mid-week rainfall slowed fieldwork and aggravated lowland flooding.

On April 2-3, freezes occurred as far south as Alabama, Georgia, and Mississippi.

For the full USDA report for April 6, click here.

USDA Weekly Grains Inspected For Export Report (April 5): Total Inspections Back Up, Thanks to Corn and Wheat