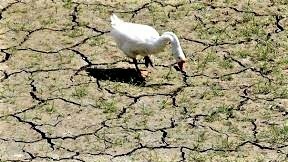 Back-to-back storms may have delivered rain to much of the eastern United States and upper Midwest last week, but dry conditions continued to prevail in Montana, North Dakota, and in the southern High Plains, including most of Texas, and hard-hit drought areas from there to California.

And according to today's Weekly Weather and Crop Bulletin from the U.S. Department of Agriculture, premature melting of mountain snowpack for the week ending April 10 further reduced moisture reserves for rangeland, pastures, rain-fed small grains, and spring-sown crops.

Most of the remainder of the country experienced warmer-than-normal weather, despite cooler conditions late in the week across much of the western and central United States.

The most dramatic warmth affected the Great Lakes region, where temperatures averaged at least 10 to 20°F above normal.

For the full USDA report for April 13, click here.

Droughts Longer, Rainfall More Erratic Over the Last Five Decades in Most of the West