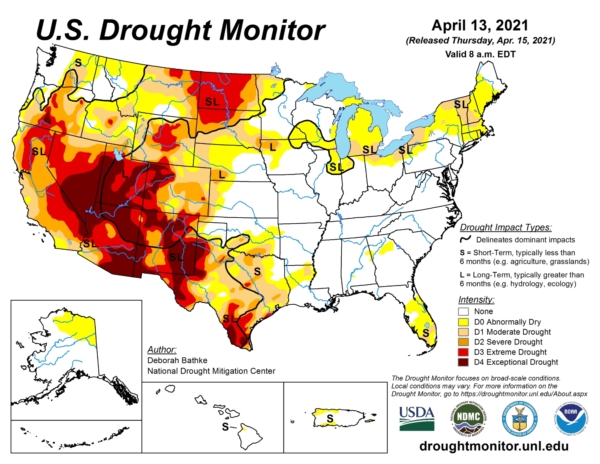 Dry conditions deteriorated in the West and New England last week, despite a storm system that dropped heavy rain over much of the central and eastern United States.

According to today's Drought Monitor report from the U.S. Department of Agriculture (USDA), parts of the Southwest are experiencing record levels of dryness for the last year, while in New England, year-to-date precipitation ranks in the top 10 driest on record.

New Hampshire and Massachusetts leaders urged the public to conserve water in response to the growing deficits.

In the West, counties in D3 and D4 regions are “heading into their worst water year ever for irrigators with the potential for large amounts of acres left fallowed.”

In the Midwest and eastern Plains, where precipitation improved soil moisture levels, beneficiaries included western Minnesota and northwestern Iowa, which had been under drought conditions since October.

Agricultural field reports indicate planters are being idled, except in the southeastern corner of the state, and cattle are being culled.

For the full USDA report for April 15, click here.

Droughts Longer, Rainfall More Erratic Over the Last Five Decades in Most of the West