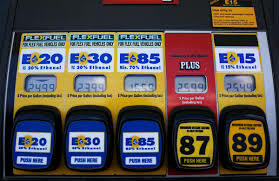 The U.S. Environmental Protection Agency has asked industry groups for their input on the future of the nation's biofuel policy after it ends its current phase in 2022, four sources familiar with the matter said.

The consultations will provide a new opportunity for the oil, corn, and biofuel lobbies to reshape the regulation, called the Renewable Fuel Standard, which has bitterly divided the two industries for more than a decade.

Under the RFS, oil refiners must blend increasing billions of gallons of biofuels into the nation's fuel mix each year or buy trade able credits from those that do.

The oil industry dislikes the policy because it is costly and props up a huge and competing market for biofuels like corn-based ethanol, while the corn and biofuel sectors want to see the program expanded to help farmers hard hit by years of low commodity prices and trade disputes.

Under the regulation, the EPA will have discretion over annual mandated volumes from 2023 on, taking over that responsibility from Congress.

Oil and biofuel groups have begun meetings with the EPA to discuss ways in which the agency could approach the RFS after that date.

Some of the groups, such as the American Petroleum Institute are advocating for the EPA to use the RFS to encourage increased use of advanced and cellulosic biofuels, instead of conventional biofuels such as ethanol.

However, Brooke Coleman, executive director of the Advanced Biofuels Business Council, said the EPA should not discourage production of conventional biofuels in favor of other biofuels.

"Any plan that displaces biofuel with biofuel is an innovation-killing non-starter that would cannibalize the industry revenue needed for investment in innovation," he said.

Another oil group, the American Fuel & Petrochemical Manufacturers, said it wants the EPA to establish a methodology to ensure blending volumes are in line with market conditions for that year – meaning they would be lower in periods of weak demand and higher when demand ticks up.

The National Biodiesel Board, which represents the biodiesel industry, told Reuters that the EPA should ensure that the RFS keeps up with anticipated growing demand for biodiesel and renewable diesel.

One representative from a biofuel group, who asked not to be named, said the group is looking for continued growth, or "at the bare minimum," stability in blending volumes for each category of renewable fuels.