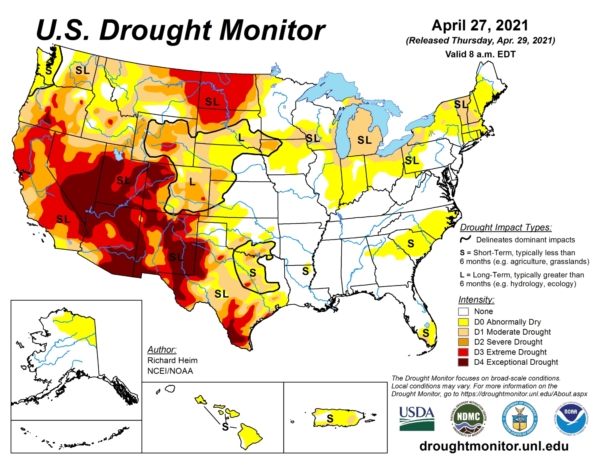 Two weather systems dropped above-normal precipitation along the Canadian border and through Gulf Coast states last week, while the rest of the contiguous United States contended with below-normal rainfall.

According to today's Drought Monitor report from the U.S. Department of Agriculture (USDA), a swath from New Mexico to Lower Michigan, and parts of the northern Plains and Far West, received little to no precipitation for the week ending April 27.

As a result, drought or abnormal dryness expanded or intensified across parts of the West, Midwest, parts of the Plains, and the Carolinas, as well as much of Hawaii and Puerto Rico.

Three dozen reports were received from North Dakota, through the Condition Monitoring Observer system, of drying ponds and creeks, hay and feed shortages, and fire risk.

By contrast, above-normal rainfall fell across parts of the West, much of the Gulf Coast from eastern Texas and Oklahoma to Georgia, parts of the Mid-Mississippi Valley, and parts of the northern Great Lakes and Maine.

Precipitation amounts were generally 0.5-2.0 inches in the West where precipitation fell, but exceeded 2 inches across a large part of the Gulf Coast states.

For the full USDA report for April 29, click here.