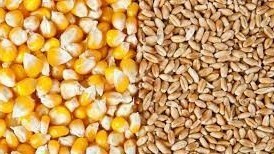 Global corn production is forecast up, driven by the United States, Argentina, Brazil, and Ukraine, according to the USDA Grain: World Markets and Trade report released Wednesday, May 12.

If realized, Brazil and Ukraine will have record production, with Argentina at record-tying production and the United States at a near record.

For global consumption, both feed and non-feed uses are expected to grow supported by greater availability.

Ending stocks are forecast up as the United States and Brazil, both major exporters, are expected to increase carryout.

Subscribe here for Grain E-News delivered to your inbox every Thursday.

Global wheat production is forecast up with larger crops in the European Union, the United Kingdom, Morocco, Argentina, Ukraine, and the United States.

Overall consumption is up with larger Food, Seed, and Industrial (FSI) use as well as larger feed and residual use.

Food consumption continues to rise due to population growth and changing diets, especially in South Asia and China.

Feed use is expected higher, especially in Europe with its significant rebound in production. Global ending stocks are forecast up slightly, with higher carryout in Russia, the European Union, and India offsetting lower stocks in China and the United States.

Trade is forecast at a record with stronger imports across Asia, Africa, and the Middle East.