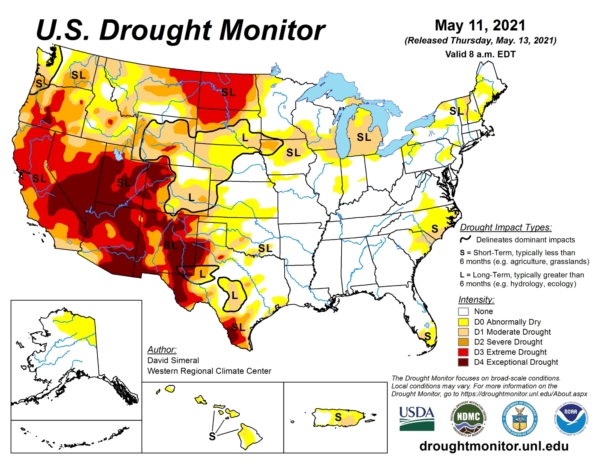 According to today's Drought Monitor report from the U.S. Department of Agriculture (USDA), California is expecting dry conditions to worsen during the summer months as snowpack runoff is forecasted to be below normal and reservoir storage levels at the state’s two largest reservoirs (Lake Shasta and Lake Oroville) are at 48% and 41% of average, respectively.

In the High Plains, portions of eastern Colorado and Wyoming saw improvement in drought conditions in response to recent rainfall events and improvement in soil moisture levels during the week ending May 11.

By contrast, abnormally dry soils and areas of dry vegetation are being observed in far western portions of both states.

In the Midwest and Northeast, beneficial rainfall during the past two weeks has helped reduce areas of drought.

In the South and Southeast, heavy rainfall impacted portions of the region during the past several weeks, leading to reductions in areas of drought in response to improved soil moisture and streamflow levels.

For the full USDA report for May 13, click here.