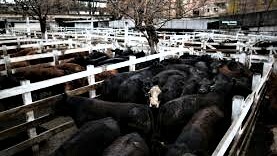 Argentine farm groups will halt trading of livestock in protest against a 30-day government ban on beef exports aimed at bringing down domestic prices, the country's main producer groups said in a joint statement May 18.

Reuters reported that the South American country's center-left Peronist government unveiled the 'emergency measure' the day before to tamp down high inflation, putting it on a potential collision course with the powerful farm sector that drives exports.

The country's four main rural associations said in a statement they would launch a nine-day halt in livestock trading starting May 20 in protest and could take further measures.

"The path and the decisions that the executive branch is taking are deeply wrong," said Jorge Chemes, president of the Argentine Rural Confederations (CRA), one of the four farm associations that launched the protest.

"This is the beginning of a raft of measures."

The standoff underscores the fragile balance the government needs to strike between supporting farm exports that bring in much-needed foreign currency and bringing down damaging runaway inflation that is set to near 50% this year.

The tension also reflects mounting global concerns about rising food prices that have seen other countries also move to control exports, including top wheat-producer Russia, which has imposed an tax on exports of the grain.

Argentina's farm sector, dominated by grains including soy and wheat, has a history of clashes with Peronist governments over tax hikes and export caps, including with former President Cristina Fernandez de Kirchner, who is now Vice President.

Argentina is the world's No. 5 beef exporter and has been increasing sales to markets like China, which has bolstered the country's ranchers but stoked fears about inflation, especially with poverty levels soaring amid a long recession.

Over half of that went to China.

In March shipments to China rose 8.3% year-on-year to $225.8 million, according to statistics from the Institute for the Promotion of Argentine Beef.

Shares in Brazilian meatpackers Marfrig (MRFG3.SA) and Minerva (BEEF3.SA) slid May 18 after their operations in Argentina were hit by the ban.

Argentina is famed for its cattle ranches and sizzling cuts of steak, which are a central part of the local social fabric, with many gatherings of families and friends held around the "parrilla" barbecue grill at the weekend.

However, rising meat costs have come under fierce scrutiny in recent months.

Some consumers — already hit hard by three straight years of recession— say they are no longer able to afford beef.