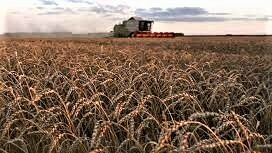 Russia competes with the European Union for the rank of the world's largest wheat exporter.

Turkey, Egypt, and Bangladesh are the largest buyers of its wheat.

Farmers in Russia were sowing their winter grains in dry soil last autumn for this year's crop, though mild winter partly repaired the damage.

The spring grain sowing is going well so far, but current dry weather means that more rains may be needed in the coming weeks — before harvesting starts in late June or early July.

Farmers have sown spring grains on 20.2 million hectares, or 69% of the planned area.