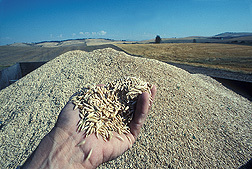 The next trip to the grocery store may result in the purchase of an extra container of rolled oats. Or two. The headline last week from USDA’s July World Agricultural Supply and Demand Estimates (WASDE) Report was not about corn or beans, but about oats.

That is the least amount USDA has ever projected in its 155 years of issuing crop yield estimates, and that compares to 1.5 billion bushels about the end of World War II.

There is trouble in oatland.

In Canada, where most of the oats originate that are consumed in the U.S., a drought has reduced the crop by 15%. In the U.S., the oat crop has been reduced by the growth in the more profitable corn crop.

The result of reduced oat production has been higher prices. Not necessarily for farmers, but higher prices for consumers. Eventually the scarcity of oats could result in the total absence of oats in the cereal aisle, not just a higher price to ration the supply.

Wheat has gone through a similar transformation. Wheat acreage in Central Illinois used to parallel that of corn and soybeans, but it’s a challenge to find any wheat in the region today.

Some is raised to either provide a mid-year revenue stream, or to provide straw for livestock bedding. And again, the diminished wheat acreage has resulted from its relationship with corn.

While oats will have different numbers than wheat, the trend will be the same.

But for wheat there is something in the works that could be a game changer, and the oat folks should be taking notice.

Because of the humanitarian needs to feed a growing world, researchers have completed the genetic mapping of the wheat genome.

They have found the roadmap for wheat genes and can identify locations in the nucleus of a wheat cell to make adjustments that will more easily create hybrid wheat with greater yields.

That process is more difficult in wheat and oats than it is in corn.

With corn the tassel (the male part) is completely separate from the ear (the female part). Corn breeders can cross breed by either removing tassels or covering ears, and voila! A new hybrid corn.

Wheat and oats are not so easy, since the male and female parts in the grain head are together.

By genetically turning on or off a gene, then planting the female (neutered) seeds with male parents in a blend of about 95:5, the male plants are assuring proper pollination of the female plants.

Oat farmers may be licking their chops, knowing they will be able to restock grocery shelves with the fixings for oatmeal.