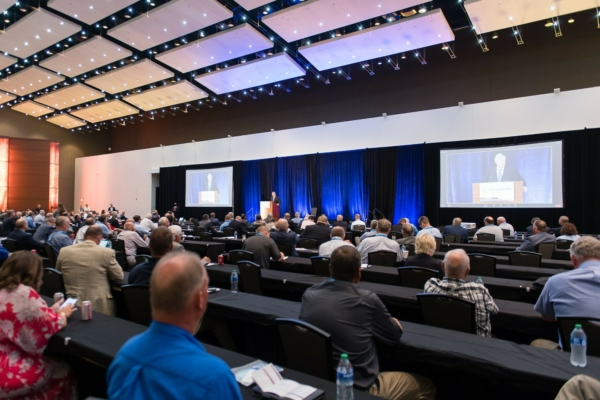 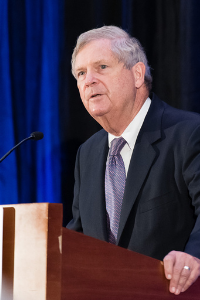 Des Moines, IA — The U.S. Grains Council (USGC) brought members together in person Wednesday for the first time since the beginning of the pandemic, launching its summer annual meeting in Des Moines, Iowa, and online through a virtual meeting platform.

Joining for his first in-person meeting since taking on his role as U.S. Department of Agriculture Secretary, Tom Vilsack (pictured at right) addressed attendees on the status and future of U.S. agricultural trade.

Vilsack began his remarks by calling the U.S. grains industry the “secret sauce” of trade, noting that its members understand the importance of partnership to growing export demand.

“We are in the process at USDA to build back better for trade,” Vilsack said. “We’ve been working on removing barriers to trade and are ready to engage more frequently and closely with our counterparts in other countries.

"American agriculture is at the center of that work because if something happens internationally, U.S. ag will feel that change. We are prepared and ready to look for more opportunities and diversity in trade partners.”

In addition, Vilsack emphasized the continued need for biofuels in the future, including for aviation and marine use.

“It will be a long time before we’re in the position where we won’t need biofuels. We need to take a look at creative ways that we can use bio-based products. If we can do this, I think we’ll see a bright future for American agriculture," he said.

USGC Chairman Jim Raben, a farmer from Illinois, began the 61st Annual Board of Delegates Meeting by thanking the industry for their perseverance during the global pandemic.

“Over the last year, our members provided customers around the world a virtual, behind-the-scenes look at their operations and ensured our global partners that the United States would continue to provide them a reliable, high-quality product, despite these uncertain times,” Raben said.

“Likewise, our staff – time and time again – have stepped up to the plate and trade has continued despite the pandemic keeping us at home and the technology challenges we’ve all encountered and had to overcome.”

“During this time, we were challenged to think in new ways, figure out how we could use technology to keep servicing our customers and to keep markets open,” he said. “I can definitively say we have been successful. We’ve had record sales of U.S. corn and U.S. sorghum during this period. While it’s still a challenging trade horizon beyond our shores, it’s one that holds great promise.”

Nearly 400 in-person and online attendees also heard a recorded presentation by former World Trade Organization (WTO) Deputy Director-General Ambassador Alan Wolff and a live presentation by futurist Christopher Kent of Foresight Alliance, who shared his vision for what U.S. trade may look like in a post-COVID world.

In the afternoon, attendees spent time in one or more of seven Council Advisory Team (A-Team) meetings. Each A-Team has a specific focus – including Asia, Ethanol, Innovation and Sustainability, Middle East/Africa/South Asia, Trade Policy, Value-Added and Western Hemisphere – allowing members the chance to offer input, set priorities and help determine the Council’s course of action over the coming year.

On Thursday, July 29, Council programming is scheduled to focus on selected markets around the world in which it works - including Latin America, the Middle East and Africa, South Asia, Mexico and China. The meeting will culminate on Friday with the Council’s Board of Delegates meeting, appointment of new A-Team leaders and election of members of the 2021/2022 Board of Directors.

More from the meeting is available on social media using the hashtag #grains21.

Momentum Continues to Build For USGC Efforts in Aquaculture