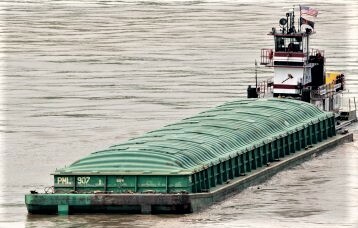 (Reuters) — Barge freight costs for moving grains in the Midwestern United States spiked on Thursday (Sept. 16) due to ongoing logistical problems more than two weeks after Hurricane Ida, while CHS Inc. said the timeline to reopen its terminal remains uncertain.

CHS Inc., a farmer cooperative and grain trader, said it expected its Myrtle Grove, LA, grain export terminal to be operational by the height of the U.S. corn and soy harvest but could not be more specific.

The terminal, which unloads grain barges and loads ocean-going vessels for export, remains without power from the local utility provider, and repair crews are using an onsite generator, the cooperative said.

Power will have to be restored to resume shipments.

Ida devastated the region’s power grid and damaged some of the nearly dozen grain terminals dotted along the Mississippi River from Baton Rouge to the Gulf of Mexico that form the busiest U.S. grain export hub.

A Destrehan, LA, facility owned by Bunge Ltd has been “running intermittently,” the company said Thursday.

As grain handlers scramble to resume operations at the Gulf, China this week booked four to six bulk cargoes of Brazilian soybeans for shipment in October and November, during the peak of the U.S. export period.

Those deals fueled industry concerns that Gulf terminal capacity would remain constrained into next month.

Delays in unloading barges arriving at the Gulf are creating a shortage of empty barges needed upriver as the harvest of corn and soybeans begins in the heart of the Midwest.

Barges on the Mississippi River from Memphis, TN, through Cairo, IL, were offered Wednesday (Sept. 15) at 750% of tariff, a surge from 650% two days earlier in a market where moves of 10 percentage points are more common.

Adding urgency, crops are maturing earlier than normal in key states such as Minnesota, Iowa and Illinois.

In Minnesota, the No. 4 corn producer, the corn harvest was 3% complete by Sept. 12, and 34% of the crop was mature, compared to the state’s five-year average of 20%, according to the U.S. Department of Agriculture.

The harvest was more advanced in southern states such as Mississippi, where 75% of the state’s corn has been cut along with 18% of the soybeans.

The bulk of soybeans in top-producing states Iowa and Illinois are generally harvested in October, and export shipments normally peak during that month or the next.

“You’ve got these southern states, and you need to get all of that through the system before the real big volume comes from places like Missouri, Iowa, Illinois,” said Mike Steenhoek, executive director of the Soy Transportation Coalition.

"That is clearly something to be monitoring."