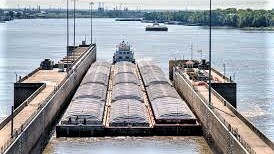 Total U.S. grains inspected for export continued to rise for the week ending Sept. 23, but not as much as they went up the week before.

Soybean inspections drove the trend, climbing 163,445 metric tons (59%) to 440,742 from week to week, according to today's Grains Inspected and/or Weighed for Export report by the U.S. Department of Agriculture (USDA).

Inspections of corn also increased by nearly one-third to 517,539 metric tons after doubling the previous week, as Gulf export terminals damaged a month ago by Hurricane Ida come back on line.

The increases, along with a more than 10-fold jump in sorghum inspections to 116,758 metric tons, pushed up total grains inspected to nearly 1.4 million metric tons, up 106,592 metric tons (8.5%) from the the previous week.

Wheat inspections, meanwhile, were below expectations at 286,087 metric tons, down 278,521 metric tons from the week before.

For the full USDA report for Sept. 27, click here.