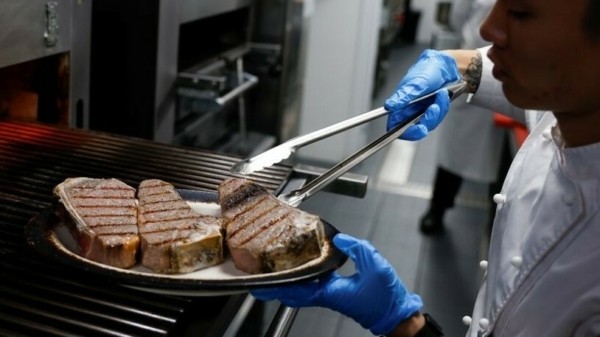 Beijing, CN/Chicago, IL (Reuters) — As Australian beef exports to China wither amid diplomatic tensions, demand there for U.S. grain-fed beef has soared, fueled by the appetites of a growing Chinese middle class.

Hotpot restaurants, Japanese barbecue chains and steakhouses, all expanding in the world's No. 2 economy, are swapping out Australian beef for U.S. meat.

Several Australian suppliers were banned last year, and shipments from others take too long to clear customs.

Beef imports from the U.S. have grown to 83,000 tonnes in the first eight months of 2021, nine times the amount in the same period a year ago, according to Chinese customs data, and are set to be worth more than $1 billion this year.

Australia also fell behind the United States this year as the top exporter of grain-fed beef to China.

"They don't have a lot of other options when it comes to the well-marbled, grain-fed product," said Joe Schuele, spokesman at the U.S. Meat Export Federation (USMEF).

"That's the product that really stands out in China."

Deteriorating relations between Beijing and Canberra have hurt supplies from Australia.

Five of its largest factories were suspended by Beijing last year for reasons such as poor labelling and contamination with a banned substance.

Though other plants are still allowed to ship to China, importers say they face long delays.

Beef imports from Australia in the first eight months fell to 96,000 tonnes, half of what they were in the same period last year, China customs data shows.

"We've been told it will take at least 85 days to clear," said a Beijing-based importer who has six containers of frozen Australian beef stuck in Shanghai port and has begun offering Tyson beef to his restaurant clients.