The United States recorded the fifth-highest overall ethanol export total, 1.31 billion gallons, despite market challenges due to COVID-19, according to numbers available this week from the marketing year ending Aug. 31.

Exports were down 8% from the previous marketing year, reflecting the challenges pandemic restrictions have had on fuel demand and trade.

The first half of the year's exports occurred before the issuance of widespread stay-at-home orders that drastically impacted demand for fuel around the globe.

While industrial exports remained strong, they sagged slightly relative to the surge of sanitizing application demand from the outset of the pandemic.

“Looking forward, more aggressive blend rates that have already been set, or will need to be set to meet emissions reduction goals, will support increased global ethanol demand and trade.”

In descending order, the top 10 export markets for U.S. ethanol were as follows: 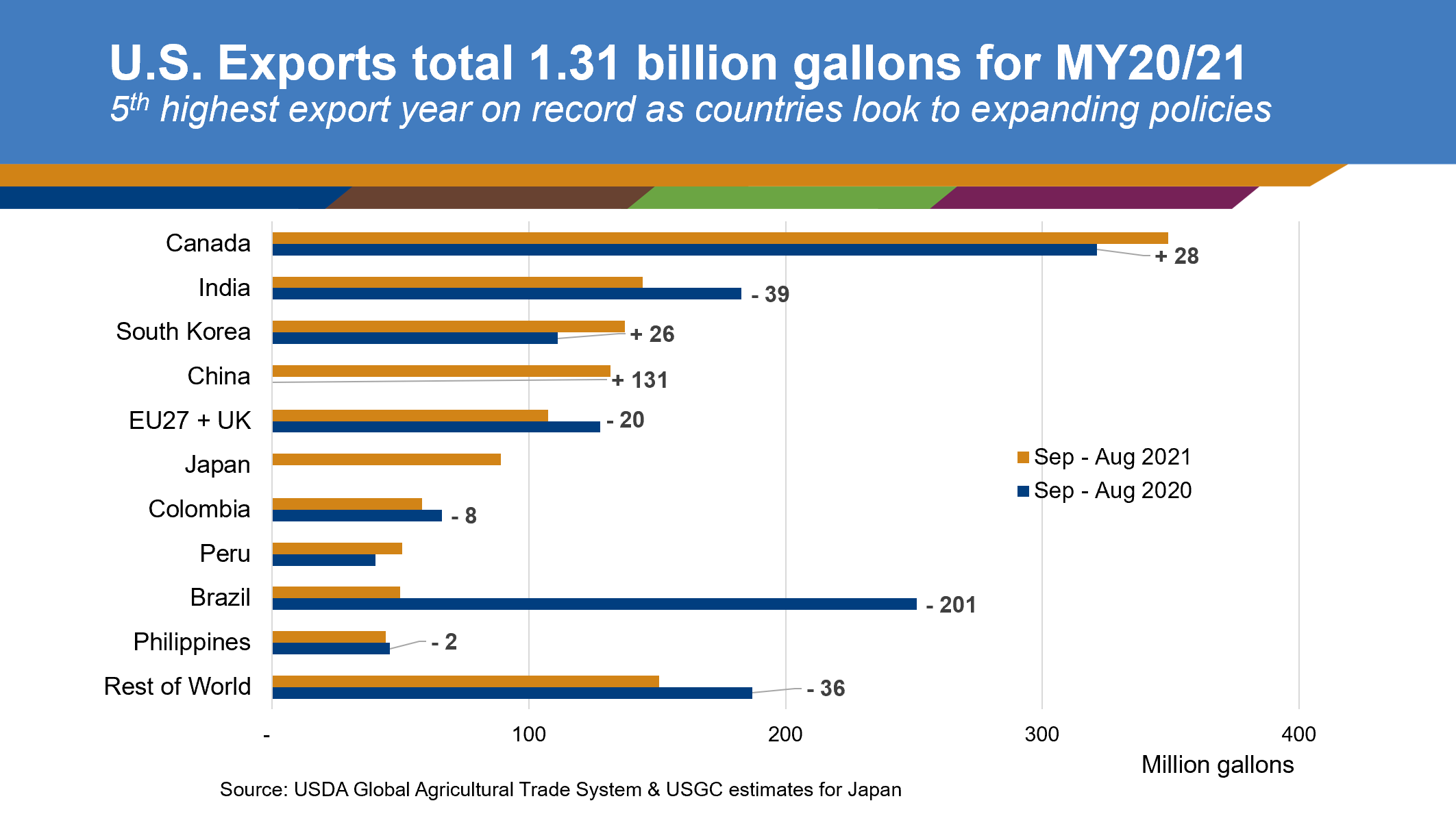 Canada — Fuel ethanol demand recovered in Canada in the just-finished marketing year after being down by roughly 14% the prior year.

Looking forward, the federal clean fuel standard, set to be implemented at the end of 2022 and geared toward reducing greenhouse gas (GHG) emissions, and provincial policy expansions like 15% renewable content in Ontario in 2025 are expected to drive future demand for ethanol.

India — The country is in the process of implementing an ambitious 20% policy by 2023, which, if realized and enforced, would more than double the fuel ethanol demand in the growing market.

U.S. exports to India totaled 144 million gallons and were destined for industrial applications due to the restriction on fuel ethanol imports.

Exports totaled 137 million gallons, a 23% increase, reflecting the strategic position of the South Korean market as a transshipment point for Southeast Asian destinations.

Ethanol has the potential to contribute to meeting additional China Phase One commitments as well as to support the country's long-term emissions reduction goals set for 2060.

China was the primary mover in the most recent marketing year, rising to the fourth-largest export market after having minimal exports in the two prior marketing years.

European Union (EU) and the United Kingdom (UK) — Overall, exports to the EU and the UK were down from the prior year by 16%, as prices weighed on market access.

In September, the UK began its E10 implementation with the expectation domestic capacity would be brought back online following full implementation of the policy.

Japan — Imports of ethanol to Japan are in the form of ethyl tert-butyl ether (ETBE), and the U.S. has market share following a change in Japan’s policy in 2018.

Colombia — The drop in the blend rate for the Colombian market has impacted overall demand, as the use of E10 is not expected to fully resume until January 2022.

Overall, exports are down by 12% compared to last year, totaling 58 million gallons.

Brazil — Brazil experienced a loss of more than 200 million exports this marketing year, dropping from the second-largest export market last year to now the ninth-largest.

The Philippines — The Philippines remains a model for how policy with a role for trade supports domestic ethanol producers when the policy is enforced.

Exports rounded out the year just shy of 45 million gallons.

India, the UK, and Colombia are key examples of the importance of policy enforcement impacting global demand for ethanol.

The U.S. industry is poised to support these countries in full implementation.

Japan, Korea and Taiwan have announced net zero targets by 2050, and ethanol can have a role in meeting those goals, making collaboration with local industry and government a priority when demonstrating that feasibility.

Finally, tariff parity with other energy products must be realized to ensure ethanol is able to competitively access these markets.