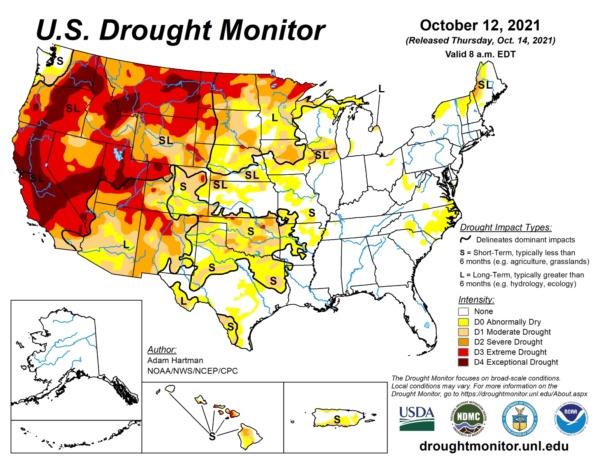 While beneficial rainfall came to many parts of the country for the week ending Oct. 12, certain regions missed out.

According to today's Drought Monitor report of the U.S. Department of Agriculture (USDA), the dry spots included areas of the Great Plains, the Northeast, and most of the West.

The only exception in the latter was an active storm track that improved fringe drought areas in the Pacific Northwest and Four Corners states.

In the wake of this storm, another low-pressure system dropped several inches of rain over the Southern Plains, further improving drought conditions (1-category improvements) in areas affected by the recent rapid onset and intensification of drought during September.

As this low-pressure system moved across the Midwest later in the week, heavy rain led to further improvements across portions of the western Corn Belt.

Earlier in the week, an upper-level low-pressure system that drifted from the Southeast to the Great Lakes kept many areas across the Southeast and Ohio Valley wet.

For the full USDA report for Oct. 14, click here.