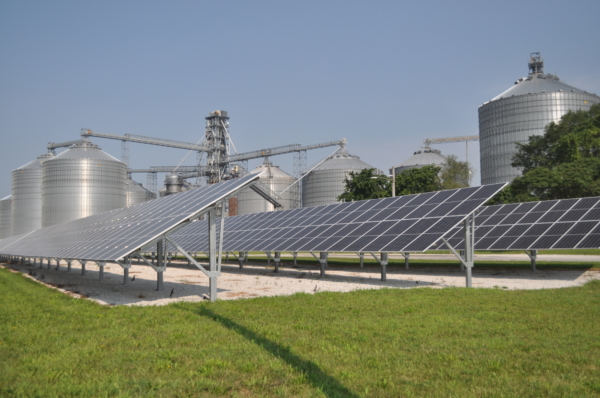 Visitors who haven’t been to Topflight Grain Co.’s Milmine, IL rail terminal recently will notice something new next to the single-story office and grain lab – a set of south-facing solar panels.

Perhaps even more impressive – across the street along the south property line for the terminal elevator are three rows, 1,700 linear feet, of solar panels that generate 400 kW for facility operations.

The Milmine elevator is Topflight’s largest with 7.8 million bushels of storage capacity and is hugely hungry for energy to load 85-car unit trains on the Norfolk Southern. Particularly hungry are a pair of grain dryers rated at 7,000 and 5,000 bph, respectively.

When Grain Journal visited Milmine in August, a neighbor’s corn immediately to the south towered over the solar panels. It wasn’t a problem, however, Bruhn explained: “That time of year, the sun shines directly overhead, and the corn doesn’t block it.”

The panels were supplied and installed in August 2020 by IL-Solar Inc., Litchfield, IL (217-250-2061). In the year since then, Topflight Grain has installed solar power at a number of its 15 grain facilities around central Illinois:

• A 10-kW rooftop installation at the main office in Monticello.

A pair of 7.5-kW installations are planned for the office buildings at Seymour and LaPlace.

“Energy costs continue to creep up,” says Bruhn. “We see the value of using solar power to even out the demand peaks, so there are no big spikes in power usage during times when the cost of energy peaks.

“And we think the return on investment is fairly quick over the long term,” he adds. “Payback is estimated at about two years for a rooftop installation, six years for a big ground array. And these are guaranteed at 85% rated production for 25 years.”

In addition, the federal government offers a hefty tax credit for the installation of solar power – 26% of the project cost. The tax credit, Bruhn says, plus utility incentives, rebates, depreciation, and other incentives help with the ROI.

From the September/October GRAIN JOURNAL