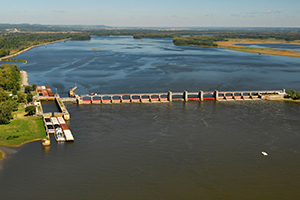 Arlington, VA — National Grain and Feed Association President and CEO Mike Seyfert urged Assistant Secretary of the Army for Civil Works Michael Connor to prioritize and fund the Navigation and Ecosystem Sustainability Program (NESP) in a letter sent on Dec. 1.

The Infrastructure Investment and Jobs Act signed into law on Nov. 15 includes $2.5 billion for inland waterways construction projects. The U.S. Army Corps of Engineers (Corps) has 60 days to produce a list of projects to be prioritized and funded.

“The existing locks on the UMR-IW were built in the 1930s with 600-foot chambers to accommodate the standard vessels used for commerce during that time,” Seyfert noted.

“However, today’s towboats can push a 1,200-foot-long tow of 15 barges which must ‘double-lock’ through, resulting in significant, costly delays.”

NGFA noted that the 2020 Capital Investment Strategy (CIS) prioritizes 13 new start construction projects, the majority of which are the new 1,200-foot NESP lock and dams.

- From the Dec. 3 NGFA Newsletter