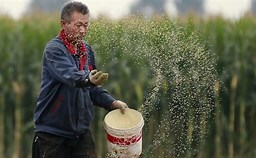 "Safeguarding the supply security of grains, and important agricultural and sideline products is always our top task and main priority," Minister of Agriculture and Rural Affairs Tang Renjian said in an interview with People's Daily.

"Agricultural and rural affairs departments must devote every effort to grain production, with the attitude of conducting a desperate fight, and with extraordinary and super strength."

Tang's comments come against the backdrop of lingering concern over food security in the world's most populous country as the COVID-19 pandemic continues to disrupt food supply chains and logistics across the globe.

In a statement released later, the agriculture ministry also emphasized that it would "ensure the stability of grain planting area in China."

"(We will) take expanding soybean oilseed production as a major political task that must be completed next year," the ministry said, adding that it will also pay "close attention" to production of rapeseed and peanut oilseed while taking measures to expand acreage and increase oilseed yields.

Tang called for abandoned land to be cultivated while maximizing the potential of intercropping to ensure stable grains acreage in 2022, People's Daily reported.

Beijing vowed to safeguard grain security and ensure effective supplies of livestock, fish farming products, and vegetables in 2022, the Xinhua news agency reported, citing comments made at the conference.

"Ensuring the supplies of primary products is a major strategic issue," Chinese President Xi Jinping said before the conference.

New York to Require Biodiesel Blending With Heating Oil in 2022

Stu Ellis: Is There a Soybean Oil Boom on The Horizon?