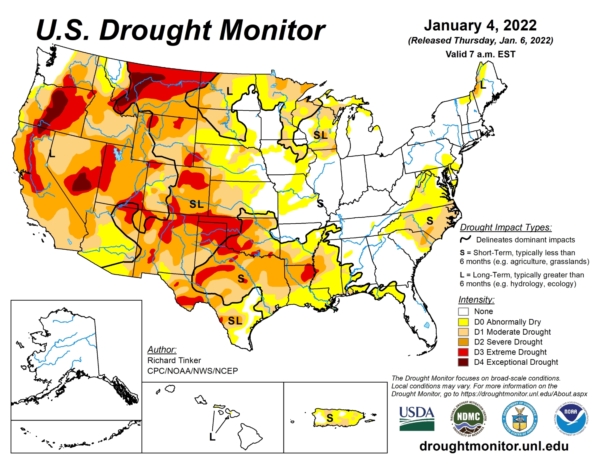 As drought conditions continued to improve across the northern half of the West Coast states for the week ending Jan. 4, fairly broad areas of deterioration developed along the immediate central Gulf Coast, the southwestern half of the lower Mississippi Valley, and the southern Plains.

According to today's Drought Monitor report of the U.S. Department of Agriculture (USDA), most of the Plains and upper Mississippi Valley also reported little or no precipitation.

By contrast, heavy precipitation — some falling as heavy snow — covered areas from the Ohio Valley and Middle Atlantic States southward through the Tennessee Valley, the interior Southeast, and the Carolinas.

Meanwhile, only light precipitation fell on the Northeast, across much of the lower Midwest, and along most of the Gulf Coast and adjacent areas.

The result was some significant areas of drought improvement across the Carolinas and interior Southeast.

For the full USDA report for Jan. 6, click here.

USDA Weekly Weather and Crop Bulletin (Jan. 5): Year of Active Weather Goes Out With a Bang

USDA Grain and Feed Update (Dec. 29): Vietnam's Production and Import Estimates Up For MY20/21