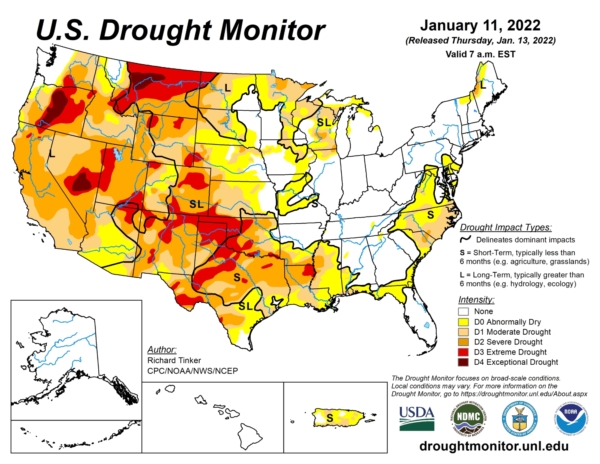 There was considerably more improvement than deterioration in the contiguous 48 states this past week, as precipitation was widespread and most areas that were dry didn't seem to deteriorate.

One of those dry spots included an area from Oklahoma and Texas westward across much of Nevada and southern California, according to today's Drought Monitor report of the U.S. Department of Agriculture (USDA).

Meanwhile, heavy precipitation pelted the northern half of the West Coast again for the week ending Jan. 11.

The largest amounts were reported in westernmost Washington and adjacent Oregon, where 6 to 10 inches of precipitation fell.

Similar totals — though less widespread — were recorded across the northern half of the Cascades.

Farther east, 2 to 3 inches were common across the Idaho Panhandle and the higher elevations farther south and east, including western Wyoming and north-central Colorado.

Generally 2 to 3 inches, with isolated higher amounts, fell on a swath south of the Ohio River, central and northeastern Arkansas, and part of easternmost Texas.

Moderate precipitation — 0.5 to 2.0 inches — fell on parts of the Pacific Northwest, the northern Intermountain West, and the central and northern Rockies adjacent to areas with higher amounts.

Similar totals also fell on parts of the Great Lakes Region, and in the East from the Ohio River to the Atlantic and Gulf of Mexico coasts.

Light to locally moderate precipitation (0.25 to locally over 0.5 inch) dampened most of the Carolinas, Virginia, the interior Northeast, and portions of the central and northern Great Plains.

For the full USDA report for Jan. 13, click here.