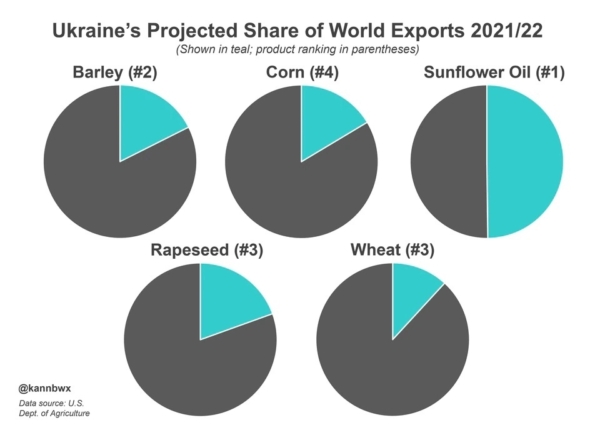 Fort Collins, CO (Reuters) — Ukraine has significantly climbed the ranks in grain exports over the last decade, this year aiming for No. 3 in wheat and No. 4 in corn, though the latest conflict with Russia has instilled fear in markets over whether Ukraine’s export efforts can succeed.

The timing of this potential export disruption is poor since the world is still trying to recover from last season’s historic supply tightness and multiyear-high prices across all grains and oilseeds.

Traders have clearly expressed their nervousness.

At Tuesday’s (Jan. 25) close, Chicago wheat futures were up 5% so far this week, hitting two-month highs, and Paris-based Euronext wheat rose more than 6% to one-month highs.

Russia has amassed 100,000 troops on Ukraine’s borders, but Moscow denies planning an invasion.

NATO on Monday (Jan. 24) said it was putting forces on standby and major energy-producing countries are discussing the protection of energy supplies, but Ukraine’s leader urged calm in a televised address Tuesday.

It is uncertain how exports might be affected, if at all, should the conflict escalate.

Although not a direct comparison, the Russian occupation of Ukrainian territory eight years ago did not necessarily hamper grain exports, though the destabilization in Ukraine’s currency raised crop worries.

Global food security is of top concern if Ukraine’s exports are disturbed as much of its grains are destined for Middle East and African nations that depend heavily on imports.

Recently, more than 40% of Ukraine’s annual corn and wheat shipments have headed to the Middle East or Africa.

By comparison, the United States’ proximity disadvantage means less than 10% of its corn and wheat exports set out for those regions.

Grain exports are a cornerstone of Ukraine’s economy.

The country this year is expected to export more than three-fourths of its domestic corn and wheat crop.

That compares with one-fifth for the United States.

Ukraine is increasingly important for oilseeds as it accounts for half of the world’s sunflower oil exports and is the No. 3 rapeseed exporter.

The country’s wheat shipments usually peak in August or September, but more than half of Ukraine’s expected corn volume must be shipped in the next five months.

Much of that corn is destined for China, as Ukraine was its top supplier before the United States took over last year.

It is unknown whether China is confident in fulfillment, but there have not been significant Chinese purchases of U.S. corn since May, signaling it is not yet seeking alternatives.

By comparison, U.S. corn exports are pegged at 61.6 million tonnes in its September-August 2021-22 marketing year.

Ukraine and the United States are the only world suppliers of corn right now, as Argentina’s crop is a couple months away from the market and Brazil’s several months away.

There is already plenty of uncertainty over South American export potential given dicey weather, but Brazil’s exported corn crop is only now being planted.

China does not purchase South American corn, so the U.S. market would be the recipient if the Asian country develops jitters over the Ukraine situation.

Ukraine’s currency, the hryvnia, started declining against the dollar in early 2014 during the revolution and Russian occupation of Crimea and conflict in Eastern Ukraine.

That devaluation rapidly peaked in early 2015, and weakness in the hryvnia has remained at more than triple the pre-2014 levels ever since.

While currency weakness typically fosters exports, it also raised costs for agricultural inputs, many of which are imported.

Producers for 2015 reportedly reduced purchases of quality inputs and used fewer chemical applications to save on expenses.

Yield hits were expected, but the results were mostly positive.

Ukraine’s increasing role in the global agricultural market has drawn a lot of foreign investment to the country, boosting yields and crop reliability.

However, farmers have already cited concerns ahead of the 2022 corn season about the potential negative impact of high fuel prices.

The hryvnia has weakened more than 5% so far this year on the recent geopolitical instability and Tuesday’s parity of more than 28:1 against the dollar is among the largest on record.

Karen Braun is a market analyst for Reuters.