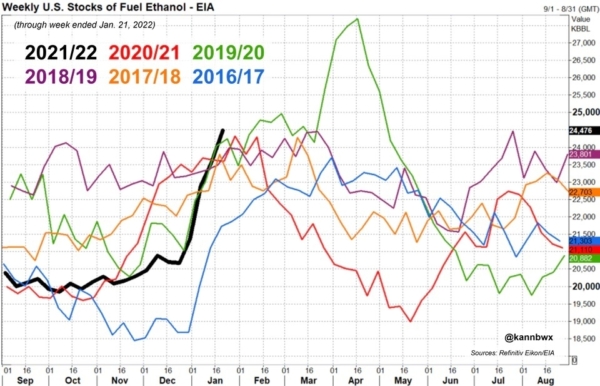 But demand has recently slipped and oil prices have accelerated, sparking a record buildup in ethanol stocks.

Chicago corn futures have also strengthened in recent months and sit at nine-year highs for the date.

However, with ethanol production claiming about 36% of annual U.S. corn usage, poor demand, and vanishing margins could be a weight on corn prices.

U.S. ethanol stocks had been at five-year lows for the date in late December, but they have surged 18.4% in the last four weeks, the largest such jump in records back to 2010, including pandemic weeks.

The only period during which inventory has ever been higher was between February and May 2020.

Production has been hovering around average levels since late November following what were near all-time highs in late October.

The relatively normal output does not reflect the huge slashing of margins in the last two months.

Corn processing margins reached $1.80 per gallon at the end of November, the strongest since 2014, but this week it hovers a few cents above zero.

Exploding oil prices have not helped.

U.S. crude oil futures have surged 32% since the beginning of December and on Wednesday reached the highest levels since October 2014.

Ethanol margins and output could be threatened through mid-February with forecasts for a U.S. cold spell.

Natural gas prices may spike if the weather is sufficiently cold, which could prompt ethanol processors to ease operations as they did in February 2021.

However, last year’s interruption is a very extreme example, as the 28% weekly drop in ethanol output was the largest ever recorded, even including the pandemic weeks.

Winter is already a slower time for U.S. motor gasoline and ethanol demand, though the downturn has been worse than usual, contributing to the ethanol stock growth.

Despite a jump in the latest week, gasoline demand is averaging about 6% below pre-pandemic norms.

Implied ethanol disappearance is 7% below.

Earlier this month, Reuters reported that the Biden administration was considering lowering the 2022 U.S. ethanol blending mandate, another potential setback for the ethanol and corn industries.

That follows the December proposal for 15 billion gallons, up from the prior two years and equal to 2019.

However, the EIA this month projected 2022 U.S. gasoline consumption below the 2019 levels, which does not support the December blending target.

The ethanol industry argues that reducing the mandate violates the Renewable Fuel Standard, regardless of demand.

The EIA’s report suggests 2022 and 2023 driving trends will top pre-virus levels, but growth in U.S. gasoline demand will be offset by increases in fuel economy.

Electric vehicles have also been seen as a potential long-term threat to U.S. ethanol.

Karen Braun is a market analyst for Reuters. Views expressed above are her own.