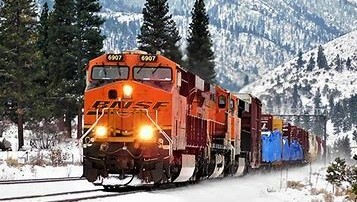 Bids for shuttle service in the secondary railcar market have been high recently.

For the week ending Jan. 20 (the latest week of data), bids for service in February averaged $1,258 across BNSF and UP.

For the week ending Jan. 19, when averaged across the two railroads, grain train speeds were down 4% from the prior three-year average for the same week.

Similarly, compared to the prior three-year average for the same week, the railroads’ grain train origin dwell times were up 151%, while their reported number of unfilled grain car orders included 1,383 more cars, an increase of 414%.

In its Jan. 21 Network Update, BNSF reported some improvements to its service, but still faces challenging operating environments in its North Region, spanning the Upper Midwest to the Pacific Northwest (PNW).

According to BNSF, a mix of extreme weather — including Arctic temperatures and heavy snow and rain in PNW — has required shorter trains and resulted in multiple outages in the region.

This article comes from the U.S. Department of Agriculture's Jan. 27, 2022, Grain Transportation Report.