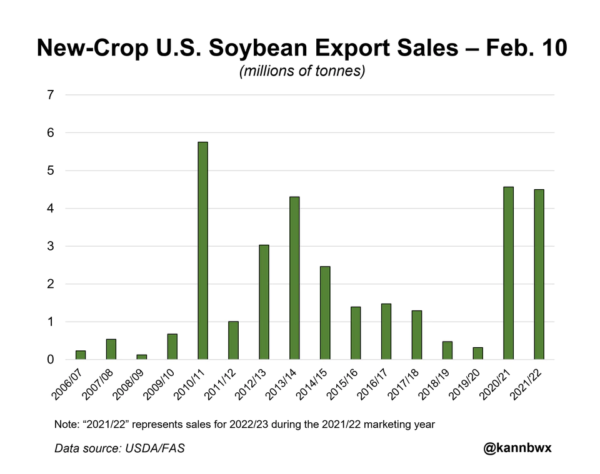 Overseas demand for the U.S. oilseed has lagged last year’s high as expected, but severe crop losses in South America and rising global prices have recently awakened buyers for both the current crop and next year’s crop.

That is below 97% on the same date last year but only slightly behind the pre-trade war average, and sales are still coming in.

USDA announced on Thursday (Feb. 17) that 120,000 tonnes of old-crop U.S. soybeans were sold to unknown buyers.

This flurry of old-crop bookings, some 6.3 million tonnes between Jan. 1 and Feb. 10, is likely a record for the period and up 28% from last year’s more than decade high.

That includes more than 2 million tonnes in net sales to China and about 2.8 million in gross sales to unknown buyers.

The only recent seasons in which final exports came in lower than USDA’s February peg were 2018-19 and 2019-20, when about two-thirds of the forecast had been sold by Feb. 10.

Forward soybean demand concerns are evident in the 2022-23 sales progress, which reached 4.5 million tonnes as of Feb. 10.

That is only about one cargo behind last year’s pace, which was a 10-year high.

China accounted for 2.58 million tonnes of new-crop U.S. soybean sales as of Feb. 10, and unknown buyers, many of which likely represent China, had secured 1.55 million.

Most of these purchases have occurred since Jan. 1.

The supposed timing was unclear, though a reduction of that size would be a 30% cut to annual imports at current levels and more than a quarter cut in domestic consumption.

That would place Chinese soybean demand close to the 2013-14 levels.

The report mentioned that China’s top feed companies in 2021 reduced soymeal rations in animal feed by 1.6 percentage points from the previous year and that the huge drop in soybean demand could be possible if low-protein livestock diets continue being promoted.

But that might create stumbling blocks in Beijing’s plans announced last week of a 15% increase in domestic meat output by 2025.

That would include restoring pork production to pre-African swine fever levels and boosting poultry and beef output.

To do this, China would need to drastically increase herd sizes to stay on a lower protein plan or increase protein intake to fatten animals, both of which require more feed.

If China turns away from soybeans, that could increase overseas demand for other feedstock like corn if China plans to maintain grain reserves.

Beijing has often stated a desire to rely less on imports, efforts that have not gone well over the last two years.

But it will likely have to make some concessions somewhere if it is to both drastically reduce soymeal demand and increase meat production.

Lighter cuts to China’s soybean consumption are not unreasonable as a pullback is in progress now.

China’s vice premier on Sunday (Feb. 13) called for the expansion of domestic soybean production in another possible move to reduce import needs or create that appearance.

The agriculture ministry said the country would raise 23 million tonnes of soybeans by 2025, up 40% from current levels.

For comparison, Brazil and the United States, which supply most of China’s annual imports, combine for more than 250 million tonnes of soybean production each year.

Beijing had been pushing for an increase to soybean production last year but failed to sufficiently incentivize Chinese farmers, who prioritized corn planting due to better profitability.

Karen Braun is a market analyst for Reuters. Views expressed above are her own.