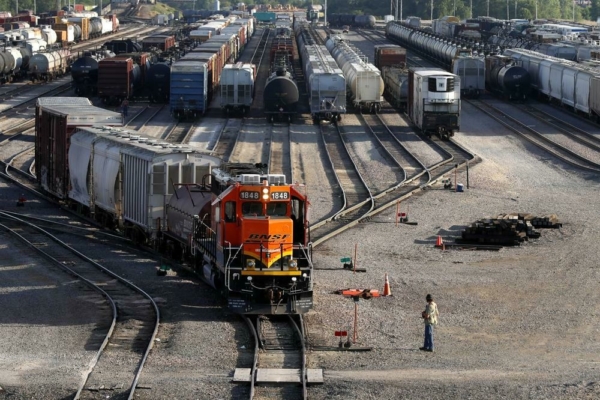 Omaha, NE (Associated Press) — Some grain elevators are so full that farmers trying to sell their crops are being turned away.

But at the same time, flour and animal-feed mills are halting production because they can’t get the grain they need.

The issue? The lack of trains to move the grain.

Federal regulators are holding hearings later this month to look into the causes of the dearth of rail capacity, which the railroads largely attribute to factors outside their control, like the broader supply-chain issues and widespread labor shortages.

But shippers, regulators, and rail labor groups say they believe the heart of the problem is that railroads cut too deeply when they eliminated nearly one-third of their workforce in recent years in the name of efficiency.

“The cuts were too severe,” said Max Fisher, chief economist for the National Grain and Feed Association (NGFA).

“Now there’s no buffer capacity to respond to increases in demand or problems in weather or train derailments and things like that.

"That buffer capacity that used to be in place is no longer there.”

Union Pacific, BNSF, and other major railroads say they are addressing the problems by hiring aggressively and asking customers to cut the number of carloads they are shipping to reduce congestion along the rail network.

“Railroads are not immune to challenges felt throughout the economy,” said Ted Greener, a spokesman for the Association of American Railroads trade group.

“Railroads continue to take active measures to address these challenges, including labor shortages.”

Companies all across the country are reporting shipping problems but trade groups say some of the worst rail issues are currently in the western United States.

In addition to the issues for farmers and grain processors, some ethanol plants have had to cut production while waiting for empty railcars to arrive.

A spokesman for the American Chemistry Council said Tuesday (April 12) that more than half the companies it represents have reported railroad service problems this year.

STB Board Chairman Martin Oberman has said that the major freight railroads placed too much emphasis on lowering costs and satisfying shareholders as they eliminated 45,000 jobs over the past six years and cut “their workforce to the bare bones.”

“All of this has directly contributed to where we are today — rail users experiencing serious deteriorations in rail service because, on too many parts of their networks, the railroads simply do not have a sufficient number of employees,” Oberman said.

The shipper groups say they hope the board will order the railroads to deliver better service and consider requiring them to open up their networks to allow competing railroads to bid on hauling shipments from companies that are currently served by only one railroad.

Freight railroads oppose that proposal because they say it would complicate shipments and slow deliveries.

The railroads defend the large operational changes they have made in recent years which include relying on increasingly longer trains run on a tighter schedule so they need fewer locomotives and crews to deliver millions of tons of goods.

“What we’re seeing now and have seen for some time is the impact of disruptive events,” Union Pacific spokeswoman Kristen South said.

“We’ve always staffed based on volume.”

Norfolk Southern said it has adjusted staffing to meet demand wherever possible but “a tight labor market continues to contribute to service challenges, while demand on our national supply chain remains unprecedently high.”

BNSF CEO Katie Farmer acknowledged to customers in a letter that its recent service isn’t meeting their expectations, but the railroad is working to improve that.

“However, restoring our network and meeting our customers’ service expectations will not be an overnight process,” Farmer said.

Railroads have been hiring steadily since the economy rebounded sharply from the depths of the pandemic, and they have stepped up those efforts this year to help resolve the service problems and prepare for more volume.

Union Pacific said it has hired 450 additional workers since January and BNSF says it is on pace to hire 1,000 people this year.

Norfolk Southern is offering $5,000 bonuses to new employees as it ramps up its hiring efforts.

CSX has also been hiring aggressively. But hiring takes a while to have an effect because of the length of time it takes to train new employees.

The railroads have also taken hundreds of locomotives out of storage since winter to help them handle additional demand, and BNSF and Union Pacific have also imposed stricter attendance rules to help ensure they have the crews they need to operate those trains.

Union Pacific just started asking customers to cut back on their shipments this week.

That Omaha, NE-based railroad said it will impose firm limits on shipments from some customers starting next week if firms don’t voluntarily cut back.

BNSF said late last month that it had started to try to reduce the number of railcars it is moving by roughly 2% to help alleviate congestion.

The traffic limits those railroads are imposing are similar to steps they took last year to temporarily reduce shipments of containers of imported goods when warehouses and ports were having trouble moving them because of the ongoing supply chain problems.