New Zealand on Verge of Wiping Out Painful Cattle Disease 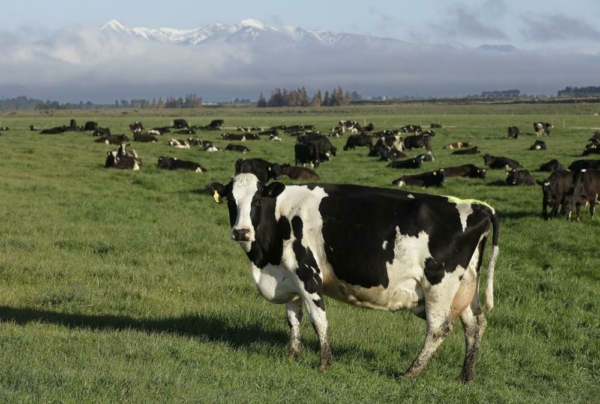 FILE PHOTO: Dairy cows graze on a farm near Oxford in the South Island of New Zealand in 2018. Associated Press/Mark Baker

Wellington, NZ (Associated Press) — New Zealand is on the verge of eradicating a painful disease from its herd of 10 million cattle after a four-year campaign that has cost hundreds of millions of dollars and resulted in more than 175,000 cows being killed.

Agriculture Minister Damien O’Connor said today (May 5) that 271 farms had been cleared of Mycoplasma bovis and only a single farm in the country still had the bacterial disease.

New Zealand would be the first country that has managed to wipe it out completely.

In an interview with The Associated Press, O’Connor said it had been a traumatic process for affected farmers.

If an infection was found on a farm, even healthy cows were killed to ensure the disease was stamped out.

“I’d say every farmer was very unhappy about having to see their herd be culled,” O’Connor said.

“These are people who have strong connections, commitment, and investment in their animals.”

Farming is the nation’s biggest export earner and vital to its economy.

When Mycoplasma bovis was first discovered in New Zealand in 2017, it prompted a huge response from the government, which concluded there was a one-off opportunity to wipe out the disease before it spread widely.

Also found in cattle in the United States and Europe, Mycoplasma bovis is a bacteria that can cause cows to develop mastitis, pneumonia, arthritis, and other painful conditions.

The bacteria is not considered a threat to food safety, but the resulting diseases in cows can cause distress and result in lower milk and beef yields.

O’Connor said the final farm with the disease was a feed yard where cattle came to be fattened before slaughter.

He said the farm would be cleaned of the disease later this year, and it would take several more months of monitoring around the country after that to declare victory.

He said the New Zealand campaign was groundbreaking.

“It is hugely significant, and I think there are other countries that have M. bovis that will be seeking to find out more about their options to eradicate as well,” O’Connor said.

He said the final cost for the eradication program will likely come in slightly under the budgeted 886 million New Zealand dollars ($580 million), money that has gone toward operations, surveillance, and compensation.

The government is picking up most of the tab, with farmers and the cattle industry also contributing.

One theory is it arrived in imported bull semen.

Fiona Doolan-Noble, a senior research fellow at the University of Otago who studied the eradication program, said government officials at first could have done a better job listening to the expertise of local veterinarians and farmers, but she thought communications had improved over time.

She said there was a chance the disease could re-enter New Zealand, although the country’s experience not only with the disease but also with COVID-19 had raised awareness for the need of more stringent biosecurity measures.

Milk products represent the country’s largest single export, with much of it sold to China, where it is used in infant formula.

Prime Minister Jacinda Ardern said the government’s partnership with those in the farming industry had been crucial to the success of the program.

“When we took our one shot to eradicate we did so to protect our national herd from a painful disease, our economy from a sharp shock, and our rural communities from widespread anxiety,” Ardern said.