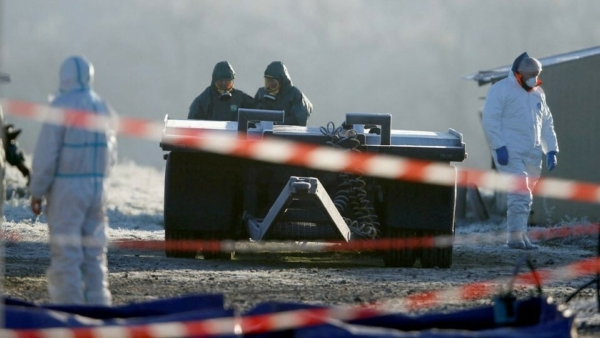 FILE PHOTO: Workers attend an operation to gather ducks to be culled in Latrille, France, in 2017. REUTERS/Regis Duvignau

Paris, FR (Reuters) — France will lift most restrictions on poultry farming that had been imposed countrywide to contain the fast spread of bird flu after a decrease in the number of outbreaks in recent weeks, the agriculture ministry said today (May 9).

France culled 16 million birds since the end of November to address its worst-ever bird flu crisis, which accelerated when the highly contagious virus spread to the country's largest poultry regions in western France.

The number of new outbreaks of the virus has peaked in France, a ministry official said, totaling 1,374 poultry farms by today.

A decree lifting restrictions, including keeping birds inside, is due to be released on Tuesday for all of France except the most affected regions in the western part of the country, the ministry said.

The spread of avian influenza, commonly called bird flu, has raised concern among governments and the poultry industry due to the devastation it can cause to flocks, the possibility of trade restrictions and a risk of human transmission.

Bird flu is a seasonal disease that typically appears in the fall with migratory birds and decreases in the spring.

An unprecedented second wave of outbreaks this year has delayed the process.

France is also planning to test an experimental vaccine against avian influenza in web-footed birds such as ducks and geese, the ministry said.

It hopes to be able to present successful results to other European Union member states in a bid to have a common approach, the ministry said.

Bird flu is spread mostly through feces of infected wild birds and transport of infected material.

It cannot be passed to humans through the eating of poultry products, but there have been cases of humans catching strains of the disease through close contact with infected birds, including one in the United States last month.