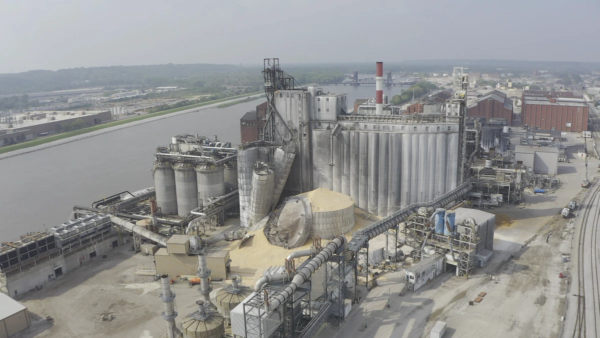 Chicago, IL (Reuters) — A grain silo imploded and set the BioUrja Group's ethanol plant in central Illinois on fire, sending two employees to the hospital and forcing the closure of the facility, a company executive said on Thursday (May 12).

The incident happened on Wednesday evening, when the Peoria, IL, fire department responded to a report of a grain bin explosion, said company president Scott Carey.

The cause of the explosion is not yet known, he said.

The employees were exposed to smoke and later discharged from the hospital, Carey said.

The sale was part of a broader effort by ADM, one of the world's largest producers of ethanol, to cut costs.

The mid-sized plant, which can produce 135 million gallons of ethanol produced per year, will remain closed as the company and Illinois Department of Labor, Division of Occupational Safety and Health look into the cause of the explosion and fire, Carey said.

"We're assessing what sort of chain reaction or larger effects there are (to the plant) from this incident," Carey said.

So far, the damage appears to be isolated to the grain silos and storage sides of the facility, with no effect on the distillation section of the plant, he said.

U.S. margins to refine ethanol in the U.S. Corn Belt are at 11 cents per gallon, off of an over seven-year record high hit late last year, when fuel demand rebounded from lows during the coronavirus pandemic.