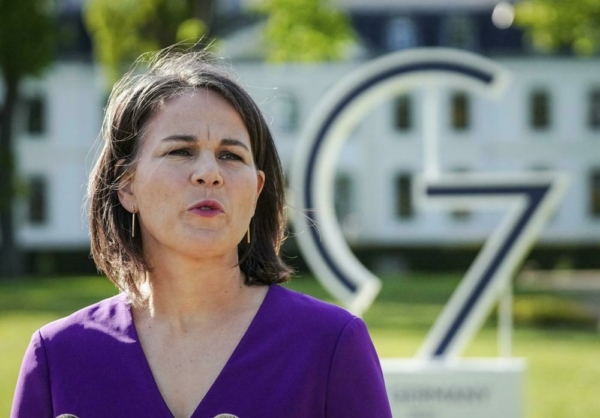 Weissenhaus, DE (Associated Press) — Top diplomats from the Group of Seven wealthy nations gathered Thursday (May 12) in northern Germany for a three-day meeting centered on Russia’s war against Ukraine and the wider impact it is having around the world, particularly on food and energy prices.

German Foreign Minister Annalena Baerbock, the meeting’s host, said the conflict already had become a “global crisis” because shipments of staple crops are stuck in Ukraine, a major agricultural exporter.

“Grain that’s food for millions of people around the world, and which is needed particularly urgently in African countries and the Middle East.”

“That’s why we are discussing how the grain blockade exerted by Russia can be unblocked, how we can get the grain out to the world,” she added.

Baerbock warned that the brewing global food emergency was being further fueled by climate change — another topic the ministers planned to discuss during their meeting in Weissenhaus, a resort on Germany’s Baltic Sea coast northeast of Hamburg.

About 3,500 police officers were deployed at the event site to provide security.

The foreign ministers of Ukraine and neighboring Moldova, which fears it could become the next target of Russia’s aggression, had been invited to attend the meeting as guests.