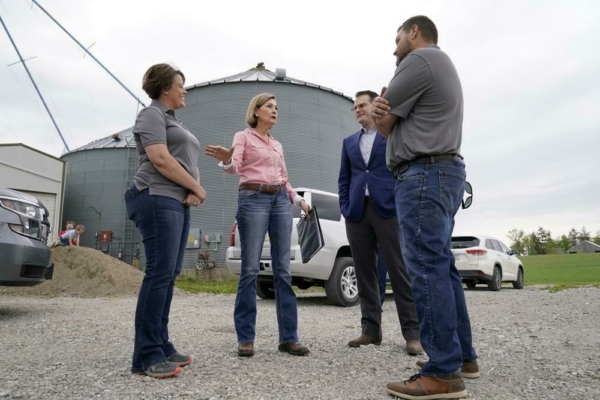 Prairie City, IA (Associated Press) — Iowa is the first state in the nation to require most gas stations to sell fuel with at least 15% ethanol under a bill signed Tuesday (May 17) by Gov. Kim Reynolds.

Reynolds signed the bill on a farm near Prairie City, about 20 miles east of Des Moines.

The Republican governor signed the bill on a flatbed wagon backed by tractors and corn planters, highlighting what she called a victory for Iowa farmers and biofuels advocates.

The ethanol industry consumes about half of Iowa’s corn crop, and the state leads the nation in corn and ethanol production.

Most gas sold in Iowa and across the country is blended with 10% ethanol.

Iowa’s law requires E15 to be sold in at least one pump by 2026, except at gas stations that qualify for a waiver.

“This historic bill makes Iowa the first state in the nation to adopt an E15 standard, setting the stage for the single largest expansion of biofuels in our state’s history,” Reynolds said.

The Legislature approved the bill with bipartisan support.

Earlier versions of the bill raised concerns it would force small gas stations to close because of the cost of installing new tanks, pipes, and pumps.

To quell those concerns, the bill includes exemptions for existing gas stations selling fewer than 300,000 gallons of fuel a year with no plans to replace its storage tanks.

Some stations with old storage tanks also can get waivers.

The state will award up to $5 million annually to help station owners upgrade equipment to handle E15.

Biofuels organizations said the bill will move the U.S. toward energy independence and save drivers money at the pump.