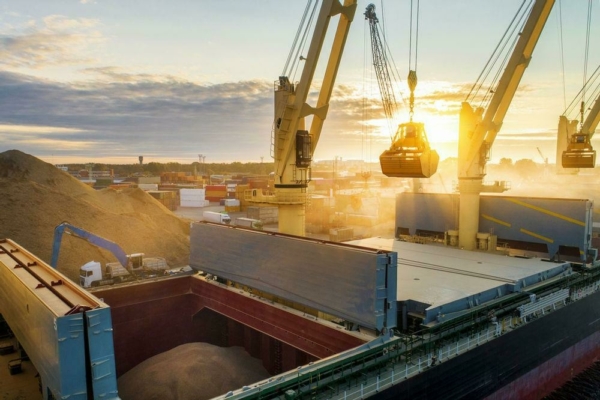 Chernihiv, UA (Reuters) — Ukraine is desperately trying to export its vast stores of grain by road, river, and rail to help avert a global food crisis but has no chance of hitting its targets unless Russia's blockade of its Black Sea ports is lifted, a government official said.

Before Russia sent troops into Ukraine on Feb. 24, the country had the capacity to export up to 6 million tonnes of wheat, barley, and maize a month but exports collapsed to just 300,000 tonnes in March and 1.1 million in April.

While the government wants to lift that to 2 million, it is hitting logistical bottlenecks ranging from a lack of train wagons, fuel, and trucks to freight wagons using a wider rail gauge than its neighbors, obstacles that could take years and billions of dollars to overcome.

At the moment, Ukraine has at least 20 million tonnes of surplus grain in silos and the APK-Inform agricultural consultancy estimates another 40 million could be available for export once the next harvest comes in this summer.

"There is hunger in Africa and in other countries," said Roman Rusakov, a senior official at Ukraine's Agriculture Ministry.

"We have seen the dynamics of a population missing that food from year to year."

"I just cannot imagine what might happen without Ukraine shipping next season's exportable surplus.

"Ports are necessary, but having said that, we certainly will improve our railway logistics.

"Meantime, (river) ports will be in place to do a good job.

"But will it be enough to reach the target of like 6, 7 million a month? No way." he told Reuters.

"The first task is to reach 2 million."

Wheat prices jumped to record highs in March, and the surge in food prices has triggered protests across developing countries, as well as contributing to an acceleration in headline inflation rates throughout the world.

The United Nations is trying to broker a deal to get Ukraine's grain shipped from its Black Sea ports such as Odesa.

Russia has said it wants sanctions lifted as part of the deal and has also accused Ukraine of mining its own waters.

In Odesa, vast grain silos tower above the port and vessels crammed with grain sit moored by the quay, waiting for the day safe passage can be negotiated.

"Odesa has to be reopened, and we need to have an agreement to have it reopened," said Pierre Vauthier, designated responsible officer for Ukraine at the U.N.'s Food and Agriculture Organization.

"A diplomatic solution has to be discussed."

Without access to the sea, Ukraine is focused on alternative routes to hit its target of 2 million tonnes a month.

The ministry is hoping to send 700,000 to 750,000 tonnes a month from two small ports on the Danube River to Romania, from where it will be shipped to North Africa and Asia.

The rest would go by road and rail to Europe.

But it's slow going for now.

When it comes to rail, it's a more promising option but remains complicated and costly.

Ukraine's trains must stop at its borders because its Soviet-era railway gauge is 9 cm wider than the tracks in its European neighbors.

The grain is then reloaded into wagons on different trains, or the wagons are lifted onto narrower undercarriages, all of which takes time and limits how much can be exported.

Once the grain has passed inspections, the next obstacle is a lack of storage capacity at Europe's ports, where tens of thousands of tonnes of grain must be put in port elevators before they can be loaded onto cargo vessels later.

Back in Ukraine, Serhii Yarosh, head of the Mlybor granary and flour mill in Chernihiv north of the capital Kyiv, watches as trucks roll by to be loaded with maize that can no longer be milled there because of damage during recent fighting.

Piles of shell casings lie on the ground near a warehouse destroyed by a direct hit.

Nearby, men are working to clear grass from old railway tracks to provide another transport route ahead of what Yarosh expects to be bumper harvest from fields pockmarked with craters from shelling.

"The quality on the fields is very good," he said.

"The winter frosts didn't have a negative impact.

"If the international community actually cares for the people in other countries, we have to start thinking together about how to solve the logistics."