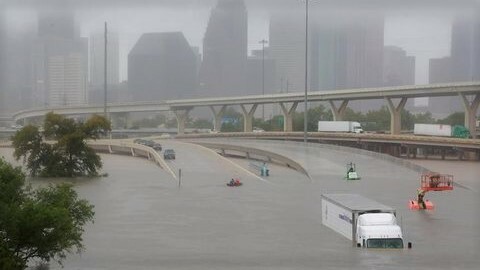 London, BR (Reuters) — Forecasts of an above-average number of hurricanes in the North Atlantic Basin this year are heightening concerns over already depleted distillate inventories in the United States and Europe.

The U.S. National Oceanic and Atmospheric Administration (NOAA) has predicted an average (25%) or above-average (65%) number of hurricanes and tropical storms will develop between June and November this year.

In the past, hurricane landfalls have sometimes caused severe damage and often resulted in significant loss of production at the major refineries clustered near the coast of Texas and Louisiana.

But it is important not to overstate the risk to fuel supplies:

Hurricane risks are concentrated in the months of August, September and October, with the peak occurring just before the middle of September.

But the impact on total nationwide distillate production over this three-month period has been modest, at least in the four decades since 1981.

At a national level, the standard deviation of changes in distillate production from one year to the next has been 16 million barrels.

The largest decline was in August-October 2020, when production fell by 48 million barrels compared with the prior year, but that was caused by the coronavirus pandemic, not hurricanes.

But nearly all the year-on-year losses in distillate production have been less than 17 million barrels, not all of which is attributable to storms, which would normally be absorbed by inventories.

In most years, hurricanes do not pose too much threat to distillate availability and prices in North America and Europe.

However, this year, national inventories are at the lowest level for over 15 years, and at a record low level along the East Coast.

The East Coast relies on distillate delivered by pipeline from the Gulf Coast refineries so a major hurricane could create a critical shortage in the region.

In previous years, the East Coast has been able to source distillates from Europe when there has been a disruption to the pipelines or the Gulf Coast refineries.

But European distillate stocks are already at multi-year lows and could deplete even further if sanctions are applied to exports from Russia.

With inventories already critically low, even a small loss of production could prove to be the tipping point that turns potential scarcity into physical shortages.

The market urgently needs to rebuild distillate stocks to more comfortable levels over the next three months so they can absorb any hurricane losses.

Exceptionally high distillate prices at the moment are attempting to discourage consumption and increase output as much as possible to insure against any hurricane-driven production losses.

John Kemp is a Reuters market analyst. The views expressed are his own.