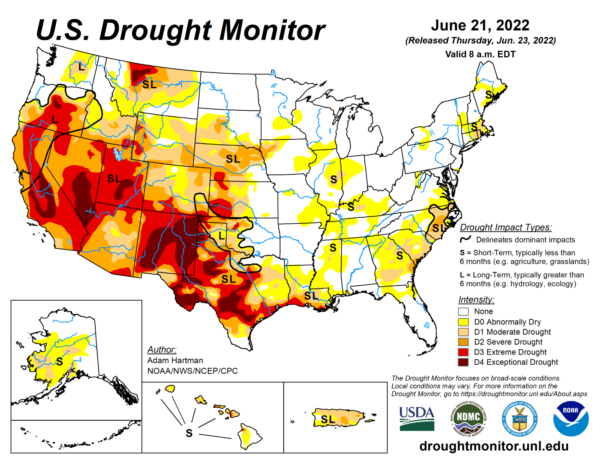 The weather offered stark contrasts this past week, with excessive heat and dryness covering the central and eastern contiguous United States (CONUS) and another week of heavy rain bringing improvements to Montana and the Pacific Northwest.

According to today's Drought Monitor report of the U.S. Department of Agriculture (USDA), the heat wave worsened conditions from the Great Plains eastward to the Mississippi Valley and Southeast.

Meanwhile, the western third of CONUS, the Northeast, and coastal Mid-Atlantic experienced seasonal to below-normal temperatures.

Despite the heat (daytime high temperatures above 100°F several days this week), recent improvements driven by an active storm track leading up to this week resulted in modest, more targeted degradations in the drought situation from the Central Plains northward.

Heavy rainfall associated with the Southwest Monsoon also fell across parts of the Four Corners region.

However, this only halted further degradations, given drought is strongly entrenched in the Four Corners.

For the full USDA report for June 23, click here.