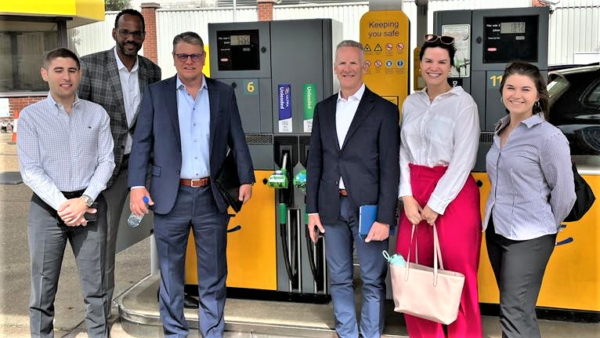 U.S. Grains Council (USGC) ethanol team members spent time in the European Union last week before coming together with other ethanol industry partners in the United Kingdom for a U.S. Department of Agriculture agricultural trade mission. The mission was a time for the group to learn more from government officials there while also emphasizing key U.S. agricultural priorities. Photo courtesy of U.S. Grains Council

Ahead of a U.S. Department of Agriculture (USDA) agricultural trade mission (ATM) to the United Kingdom (UK), U.S. Grains Council (USGC) staff met with government and industry officials in Paris and Brussels to assess the status of ethanol in the European Union (EU) and to further share the benefits of U.S. ethanol.

The EU is one of the largest and most consistent markets for U.S. ethanol.

A long-term goal for the USGC is for the European government to allow full access to corn-based ethanol in its policy revisions based on its science-based carbon reduction benefits.

In Paris, staff members met with the Organization for Economic Cooperation and Development (OECD) and the International Energy Agency (IEA) to discuss the considerable role of first-generation ethanol as a solution that would bring immediate environmental and economic benefits to the EU.

During the next leg of the mission, the group met with ePURE, a Brussels-based organization promoting the benefits of ethanol use throughout Europe; met with DG MOVE, the organization responsible for EU policy on mobility and transport; and took part in a strategy session with consulting group FTI.

“These multilateral missions where we personally interact with key organizations based in the EU are crucial to deepening relationships to both educate and grow champions that will promote corn-based ethanol as a current viable solution to EU consumers and governments in their fight against rising greenhouse gas emissions while mitigating energy supply disruptions,” said Mackenzie Boubin, USGC director of global ethanol export development.

The group came together with other ethanol industry partners, including Growth Energy, the Renewable Fuels Association (RFA) and POET once arriving in the UK for the ATM.

The ethanol-focused participants spent the final two days of the mission emphasizing key U.S. agricultural priorities to Greenergy, a fuel supplier; the Department of Transport, where participants discussed the U.K.’s Transport Decarbonization plan and the transition outlook towards lower carbon fuels; and S&P Global Platts, a commodity and energy insights provider.

“U.S. government engagement and advocacy that reiterates our message with U.K. stakeholders contributes to the council’s objectives on increasing ethanol blends in country,” Boubin said.

"As the UK begins creating their own national standards following Brexit, USDA involvement in promoting harmonized ethanol specifications will further allow access into the U.K. market.”

In September of 2021, the UK began expanding their gasoline supply from a base E5 toward an E10 blend.

Today, total UK fuel ethanol consumption has reached 280 million gallons, equivalent to a 7% ethanol blend, but is planning to achieve a 9.7% ethanol blend in the near term.

With U.S. ethanol imports increasing 400% year-on-year, the USGC applauds the UK's recent move to an E10 blend and will continue to work with our partners in country to achieve a successful 10% implementation.