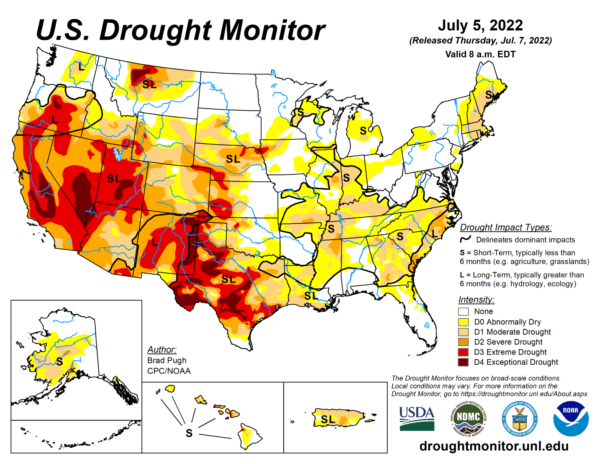 Rapid expansion of short-term drought continued this past week across the Ohio, Tennessee, and Middle Mississippi Valleys along with parts of the Corn Belt.

According to today's Drought Monitor report of the U.S. Department of Agriculture (USDA), seasonal dryness also prevailed throughout California, while much of the Pacific Northwest became drier after a wet spring.

By contrast, thunderstorms brought drought relief to parts of the central to northern Great Plains as above-normal temperatures set in.

A tropical disturbance in the western Gulf of Mexico and a trough of low pressure also generated heavy rainfall and improving drought conditions in southeast Texas and southwest Louisiana.

Rainfall was more variable across the Southeast with isolated amounts exceeding 3 inches while other areas remained mostly dry with worsening drought conditions.

Following the unusually heavy monsoon rainfall during late June, heavy amounts were more localized this past week across New Mexico.

For the full USDA report for June 30, click here.