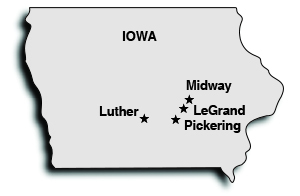 On Aug. 10, 2020 – the day of the deadly derecho storm in Iowa – four employees of Mid-States Millwright & Builders (515-382-6280), plus two more from CenterPoint Electric were outside at Key Cooperative’s grain elevator two miles south of Le Grand, IA. They were going through the punch list on a new 400,000-bushel steel tank they recently had completed.

“Around midday Ryan Janssen, our safety director, called to say that there had been damage at our locations in Kelley and Nevada (IA), with winds of at least 100 mph, and the storm was headed our way,” Brown says.

“The sky in the west kept getting darker and darker. The office staff took shelter at the east end of the office building. As the shelf cloud passed overhead, it was dead calm. Then it was as if someone threw a light switch, and the wind hit us. A piece of bin roofing hit the building, and it blew out all the windows out.”

The six men outside were only able to reach the above-ground tunnel in the new steel tank in time before the winds struck. It wasn’t shelter for long.

“The bin didn’t last five minutes,” Brown says. “It blew right off over their heads.”

The workers scrambled from the east to the west side of the tunnel in a vain attempt to avoid the driving rain. Amazingly, no one was injured.

“One of the Mid-States guys told me later that it was like standing inside of a car wash and being hit by a pressure hose for 45 minutes,” Brown says.

The Le Grand elevator was almost completely destroyed. So were elevators and a lot of other structures across the state in a relatively narrow band, roughly following U.S. Highway 30, while farmers saw huge acreages of previously healthy corn and soybeans flattened.

Unlike the winds in a tornado, derecho winds do not rotate. Instead, they are straight-line winds running out from and ahead of a long-lasting line of severe storms. Their wind damage swatch extends for more than 250 miles at wind gusts of at least 58 mph.

The Aug. 10, 2020 derecho covered a distance of 770 miles. It originated that morning in northeast Nebraska, then crossed the width of Iowa from west to east, then northern Illinois, and ended in northeast Indiana.

Iowa was the hardest-hit state, with an estimated $7.5 billion in damages, including $500 million in crop losses, and four deaths.

Often called an “inland hurricane,” winds in the August 2020 derecho were clocked as high as 140 mph in Cedar Rapids, IA. That’s the equivalent of a Category 4 hurricane. To put that in perspective, Hurricane Ida, which devastated New Orleans, LA, shut down grain exports, and caused deadly flash floods in the Northeast, was a Category 4 storm.

Many of the photos seen in the media at the time focused on grain elevators blasted apart by the winds. This article focuses on five of them, all in central Iowa, that Mid-States Millwright & Builders was hired to rebuild. 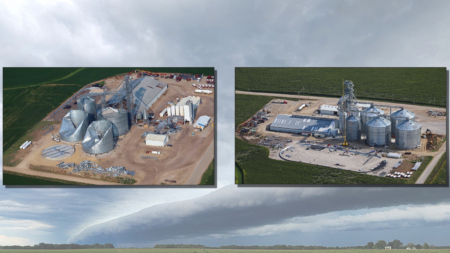 At the Le Grand elevator, the “inland hurricane” destroyed all four of the facility’s 90-foot-diameter dry storage tanks, two grain dryers, a 12,000-bushel hopper wet tank, tore off part of the roof of a 500,000-bushel flat storage building, and twisted a leg support tower 6 inches out of plumb.

Key Coop took about a week to evaluate the situation at Le Grand before making any final decisions. “We decided to rebuild,” says Jason Dubberke, grain division manager, “but we also took some time to redesign the facility and maybe overbuild for future growth.”

Among the changes to be made during the rebuild, which was just finishing up when Grain Journal visited in late August 2021:

• Placed both receiving pits under a single roof structure.

• Added a 10,000-bph below-ground reclaim conveyor in the flat storage building as a labor-saving move.

A set of four 50-hp Brock centrifugal fans per tank can deliver 1/10 cfm per bushel of aeration through in-floor ducting. (At the rebuilding projects covered in this article, in some cases, the brand of tank and brand of fans do not match. Those were cases in which individual fans survived the derecho intact and were reused on new tanks.)

In addition to these is a Brock 40,000-bushel hopper tank for wet grain. It stands 30 feet in diameter and 79 feet tall at the eave with a 50-degree hopper. A set of four Brock 15-hp centrifugal fans deliver 1/5 cfm per bushel of aeration.

In the flat storage building, Mid-States installed a 10,000-bph reclaim drag conveyor in a below-ground tunnel running out to other reclaim equipment outside of the building. Workers use front-end loaders to push grain into the conveyor.

The legs feed grain into a Schlagel Swing Set triple distributor with eight 16-inch ducts, and all are enclosed in a Mid-States 20-x-20-x-190-foot support tower. The old fill conveyors were replaced with Mid-States 15,000-bph drags.

Reclaim from the 90-foot tanks is done with a mix of Mid-States and Schlagel 10,000-bph drag conveyors in above-ground tunnels.

Elevator operations have been placed under control of a new Comco automation system, which handles everything except the truck scales, which continue to rely on manual input. 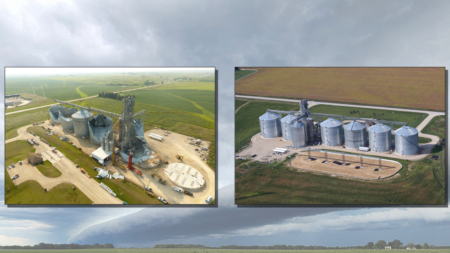 The August 2020 derecho destroyed five of six 105-foot-diameter steel tanks at Mid Iowa Cooperative’s elevator in Midway, IA, a crossroads containing the elevator and a John Deere dealership eight miles north of Toledo, IA. The one tank that survived was three-quarters full of corn at the time.

The storm also took out all of the fill conveyors, overhead loadout bin, a wet tank, a dryer, and twisted the casing of one of the two receiving legs. Mid-States repaired the leg casing using its own Demag 245-ton crane to provide support for the structure until the work was done.

After the storm passed, a Mid-States crew that had been working on a Mid Iowa elevator north of Grundy Center, outside of the derecho’s path, and a representative from Nationwide Insurance met up with Mid Iowa CEO Mike Kinley and COO Rick Eckerman (now retired) who were ready with marching orders on a rebuild.

“Mike Kinley ordered new bins the same day as the derecho,” says Bruce Kempf, the current COO. “Crews were tearing down the old bins the next week, and the same day the first concrete pad was cleared, the new bin was delivered. We were operational in 45 days, and we never missed a load of soybeans. Mid-States did an outstanding job.”

In the meantime, Mid-States replaced the five wrecked big tanks with five Brock 760,000-bushel corrugated steel tanks standing 105 feet in diameter, 96 feet tall at the eaves, and 124 feet tall at the peaks.

While the receiving legs were undamaged, the same could not be said for their support tower. Mid-States fabricated a new 10-foot-x-10-foot-x-140-foot support tower with switchback stairs.

In addition to the rebuilding, Mid Iowa added a 2-million-bushel temporary storage pile. The pile measures 550 feet long by 200 feet wide with a 4-foot perforated steel sidewall and lime floor. A set of eight GSI 10-hp axial fans provide aeration and hold the tarp in place. The pile is filled by a 15,000-bph drag conveyor inside a truss system. Workers can use a 30,000-bph Sudenga portable drag conveyor to fill and empty the pile.

The elevator was fully operational before the 2020 fall harvest was over.

With 71 locations all over the central part of Iowa, Heartland Co-op had plenty of places in harm’s way during the derecho.

“We had 64 bins destroyed and 120 damaged,” reports Bill Chizek, director of safety and compliance for the cooperative. “Some of those bins were only three or four years old, all constructed by Mid-States Millwright & Builders. We had 40 locations with damage, ranging from minor to a total loss.”

While the losses were devastating, all of Heartland’s locations were covered by Nationwide Insurance. And the rebuilding process was made somewhat easier by Heartland’s practice of building only a few standard sizes and capacities of equipment. That cuts down on the size of parts inventory and makes it easier to get employees and contractors up to speed on maintenance and repair.

For example, the cooperative prefers 78-foot-diameter, 425,000-bushel tanks for its steel storage. None of them have sidedraw spouts.

While steel tank manufacturers today can build tanks holding 2 million bushels or more, those behemoths haven’t interested Heartland. Chizek comments that the cooperative finds it less challenging to keep grain in condition in the smaller-size tank.

During the visit a year after the derecho, Grain Journal visited three Heartland locations rebuilt by Mid-States Millwright – Pickering, Luther, and Slater. “Mid-States has been one of our millwrights for many years,” Chizek says. 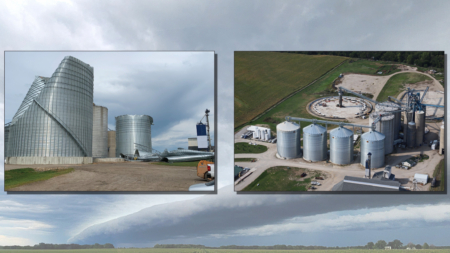 Pickering, IA. Grain Journal met up with Chizek at the cooperative’s 4.7-million-bushel elevator in Pickering, an unincorporated spot northwest of Gilman.

In the derecho, Pickering’s four main storage tanks were flattened, as well as a smaller tank connected to concrete storage. The roof of a fertilizer shed was blown off, several legs were twisted off plumb, and a warehouse attached to the office building was destroyed. A garage building also was damaged.

“Within 24 hours, Mid-States was out here to make sure the power was shut off, and anything dangling overhead, such as spouting, was secured,” Chizek says.

The rebuild got underway around Oct. 1 and was nearing completion when Grain Journal visited.

Aeration is supplied at 1/7 cfm per bushel by four GSI 50-hp centrifugal fans per tank.

In addition, COMCO supplied a new automation system for the facility. 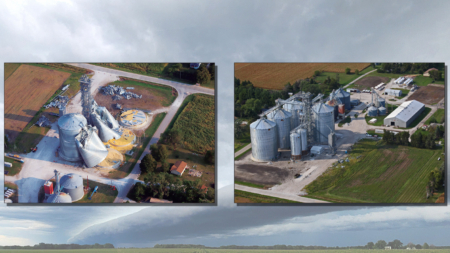 Luther, IA. Up until 2016, the grain facility in Luther, about 10 miles south of Boone, IA, consisted of a few small old tanks. That year, Mid-States Millwright constructed a modern 1.6 million-bushel elevator at Heartland’s in-town location. Mother Nature didn’t allow it to stand for very long.

When Grain Journal visited in August 2021, another summer storm was descending on Luther, but nothing nearly as bad as the previous year. Young provided a tour of the site via golf cart and reported that everything was complete except for some reclaim conveyors. Even without those, the facility was ready to receive grain.

Grain is deposited into a Schlagel SwingSet triple distributor, which sends it onto a series of 15,000-bph drag conveyors, which can fill storage tanks at 30,000 bph. Tanks will empty onto Mid-States 7,500-bph drags in above-ground tunnels. 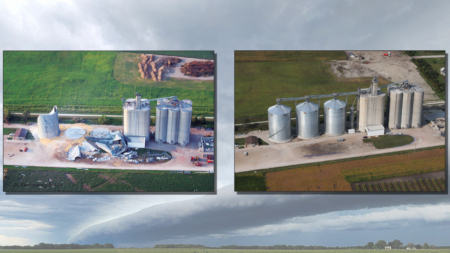 Slater, IA. The 2.1-million-bushel elevator at Slater, about 25 miles northwest of Des Moines, IA, is a mix of concrete storage on the east and steel on the west. The derecho basically took out the steel half of the facility, as well as some steel equipment atop the concrete, but left the concrete standing otherwise unscathed.

Midwest Mechanical rebuilt the three 425,000-bushel steel tanks that were lost with three GSI 425,000-bushel tanks in the size and with the accessories that Heartland prefers.

The derecho also took out a grain dryer. Mid-States installed a new Sukup 2,700-bph tower dryer and repaired the wet and dry legs that had served the old dryer.

“Overall, the performance was good,” says Location Manager Cramer Holland. “There are always some delays and anxiety, as with any project.

“The coordination was great,” he adds. “We met every other morning to figure out our next steps. We made a lot of decisions in a very short period of time.”

Before and after photos of grain elevators hit by the Aug. 10, 2020, derecho in Iowa. 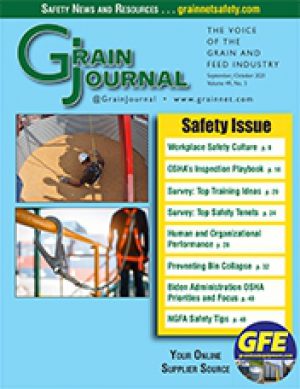 View this case study and more in the Grain Journal Sept/Oct 2021 magazine.