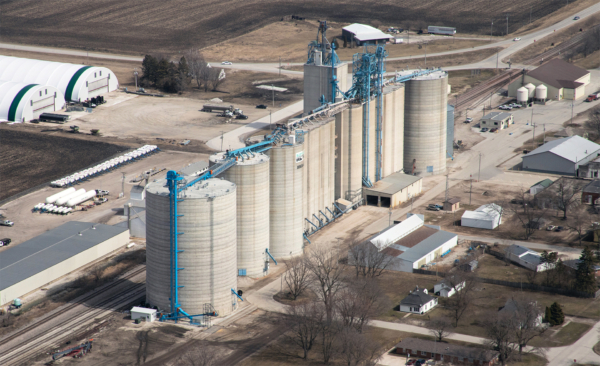 FORT DODGE, Iowa — NEW Cooperative has in recent years gone from a relatively small local farmer-owned cooperative to a large regional covering about two-thirds of the state of Iowa, mainly through mergers and acquisitions.

Once you get to that size – NEW Cooperative currently operates 39 grain elevators – construction crews usually are busy most years either building greenfield sites or adding onto and upgrading existing sites.

In 2019, NEW Cooperative focused its attention on two locations – at Duncombe, IA near the Fort Dodge headquarters in central Iowa, and at Blencoe, in the Missouri River Valley along the western edge of the state.

The cooperative added jumpform concrete storage at both locations and also a 6,000-bph tower dryer at Blencoe.

The new silo at Duncombe standing 98 feet in diameter and 136 feet tall, at the west end of the facility’s row of silos along Eagle Street, is the largest ever constructed there.

“The idea was to put soybeans in it, in order to make room for corn in the fall,” says Location Manager Steve Daniels, who has been with the cooperative for 36 years. “Like everyone else around the Midwest this year, we had trouble getting planted with the wet spring. But then we had timely rains through the summer, and we were looking at corn yields upwards of 230 bushels per acre.

“We chose the Hoffmann silo because it fit in the property the best with the least amount of soil corrections.”

NEW Cooperative already had plenty of experience with the Hoffmann product and brought in Global Ag Inc., Hampton, IA (641-456-2310), as millwright on the project at Duncombe.

The Duncombe silo is outfitted with a flat floor, two sidedraw spouts, and 9-foot-x-9-foot Bobcat door, eliminating the need for a sweep auger. It also has a nine-cable TSGC grain temperature monitoring system.

A set of four 60-hp Decatur Aeration centrifugal fans provide 1/7 cfm per bushel of aeration through in-floor ducting with the assistance of six rooftop exhaust fans.

In addition to the silo, crews installed a new receiving pit and Global Fabrication 20,000-bph leg adjacent to the silo, outfitted with two rows of Maxi-Lift CC-MAX 14x8 red buckets mounted on a 31-inch Maxi-Lift belt.

The leg deposits grain into a three-hole Schlagel electronic distributor on top of the silo. From there, a Global Fabrication 20,000-bph overhead drag conveyor sends grain to the new silo or on to other storage.

The silo empties onto a 7,000-bph Global Fabrication above-ground drag. This deposits grain onto an inclined drag, lifting it to a loading spout for trucks parked over the receiving pit.

The new Hoffmann silo at the Blencoe location also holds 750,000 bushels, but this one measures 98 feet in diameter and 132 feet tall.

Location Manager Ben Bears, who came to NEW Cooperative six months ago after working for Attebury Grain in Texas and for ADM in various locations, says he was just looking for ways to place more grain in state-of-the-art upright storage, as opposed to ground piles during harvest.

Also, Bears noted, the coop wanted to place some new storage near some of the newer portions of the elevator for convenience sake. The new silo would be able to hold grain that otherwise might have to ship upon receipt rather than wait for a more favorable basis.

NEW Cooperative awarded a contract to Midwest Mechanical, Logan, IA (712-644-2711), for millwright work related to the Hoffmann silo. NEW Cooperative did the electrical work in-house and installed a new MCC room at the elevator.

Work at Blencoe got underway early in the spring of 2019 and was just finishing up when Grain Journal visited early in January 2020.

The flat-bottom silo is equipped with a 16-inch hydraulically-driven Springland sweep auger and a seven-cable TSGC grain temperature monitoring system.

A set of six 50-hp Decatur Aeration centrifugal fans produce 1/7 cfm per bushel of aeration for the new silo.

Similar to the project at Duncombe, a new Global Fabrication 20,000-bph leg attached to the new silo is outfitted with a 1,000-bushel mechanical receiving pit and two rows of Maxi-Lift 14x8 red CC-MAX buckets are mounted on a 32-inch belt. The leg deposits grain directly onto a 20,000-bph Global Fabrication overhead drag conveyor without a distributor or valve.

The project at Blencoe also included the installation of a new 6,000-bph, propane-fired Zimmerman tower dryer, which replaces an older, smaller, and less efficient dryer.

“The old dryer required a lot of maintenance work,” Bears comments. “Also, it was loud and inefficient.”

The new Zimmerman dryer, on the other hand, operates much more quietly and efficiently, he adds. It is serviced by a pair of Global Fabrication 8,000-bph wet and dry legs eqiupped with Maxi-Lift CC-MAX 14x8 red buckets mounted on a 15-inch Maxi-Lift belt. 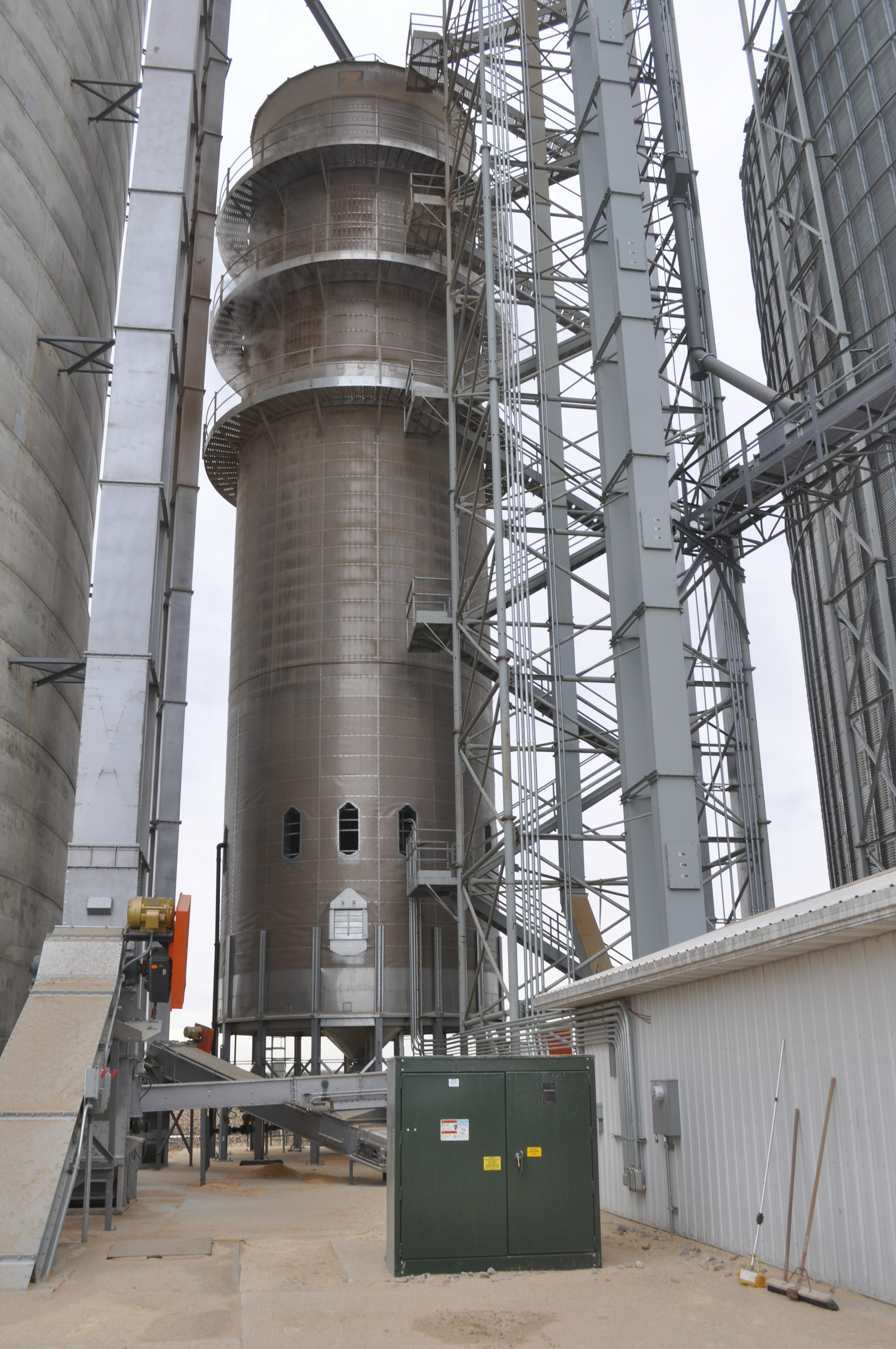 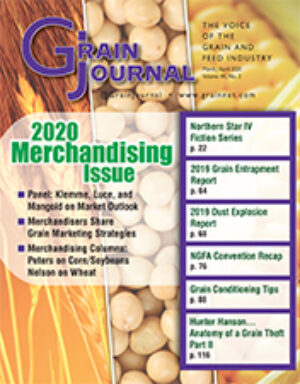