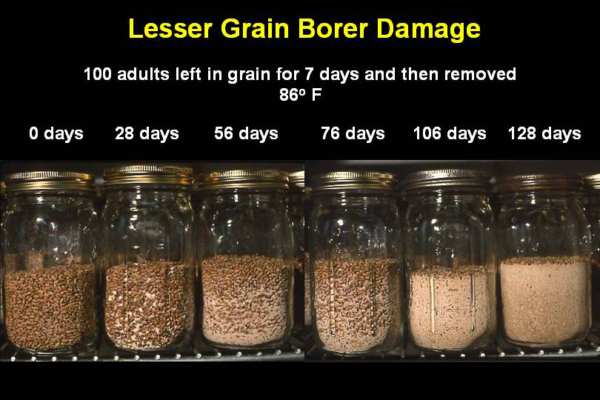 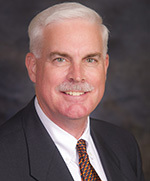 Stored grain insects can cause a serious threat to grain that is stored for several months. Significant losses to both grain quality and quantity may occur.

It is critical to know what type of insect pests potentially may infest your grain.

Insect pests of stored grain fall into two categories: internal feeders and external feeders. Internal feeders are the more serious group of pests, because they feed on whole grains, and the larvae live inside the kernels, causing damage.

The damage created by these insects may lead the seller to realize a discount fee at the time of sale if there are 32 or more insect-damaged kernels (IDK) in a 100-gram sample of grain.

Internal feeding insect pests of stored grain feed upon intact, whole kernels. After the eggs are laid in, on, or loosely among the kernels, the larvae burrow into them, causing damage within the kernels, where it is unobservable. An infestation is known only when adult insects are observed or holes in the kernels are detected.

The remainder of this article focuses on the lesser grain borer, Rhyzopertha dominica.

The lesser grain borer is a beetle found nearly all over the world on a wide variety of food. It prefers cereal grains such as wheat, corn, rye, rice, and millet but may also feed on flour, dry beans, legumes, and pasta. It usually avoids oilseeds and spices, because they are not suitable for development of larvae.

It is a small beetle about 1/8 inch in length (see the image on p. 108). It is cylindrical in cross section, and the head is not visible when viewed from above, because it is tucked under the thorax. It is dark reddish-brown in color with a slightly roughened surface. It has 10-segmented antennae that are clubbed, with the last three segments greatly enlarged.

The female lesser grain borer lays 300-500 eggs in its lifetime and deposits them singly or in clusters amongst the kernels.

When lesser grain borer eggs hatch, the larvae bore into the kernels, and the rest of their development occurs within the kernel. The adult emerges from a nearly perfectly round hole that it has chewed through the kernel. Their life cycle takes about 25 days under ideal conditions.

Adult lesser grain borers are strong fliers and have been captured up to two miles from the point of release. The adults are long-lived, up to one year, and the feeding of both the larvae and adults produce a large quantity of powdery residue (see the chart on p. 107). Grain that is heavily infested will have a sweet, slightly pungent odor, and it will begin to mold because of the increased moisture levels due to the respiration of many insects.

In large masses of grain infested with lesser grain borers, the best method of control is by fumigation because the larvae and pupae are inside the kernels. Grain protectants only kill insects that are outside of the kernels and contact the insecticide.

It is important to regularly monitor your stored grain by sampling or using traps to determine the level of infestation. If an average of two or more lesser grain borer adults are found in a 5-foot grain trier sample, or more than 7.35 adults are found in a week-long probe trap sample (such as the Storgard WB Probe II by Trécé, Inc.), you need to fumigate.

Careful and persistent monitoring of your stored grain is needed to avoid having significant losses from damage caused by lesser grain borers.

Edmond Bonjour is an associate extension specialist and stored products entomologist in the Department of Entomology and Plant Pathology at Oklahoma State University, Stillwater. He can be reached at 405-744-8134 or

From the September/October 2021 GRAIN JOURNAL