High-Visibility Clothing: A Necessary Safety Item That Also Sends a Message to Customers 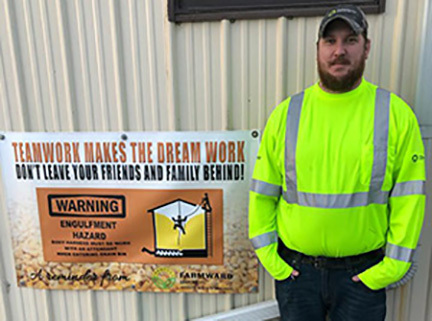 Morgan, MN — At Farmward Cooperative, high-visibility clothing reflects a team approach to safety that stands out to customers.

High-visibility clothing might be more recognizable at a building or highway construction site, but the high-traffic patterns of a grain elevator – by foot, vehicle, rail, or powered equipment – make the reflective clothing a must-have, according to Aaron Guggisberg, safety manager at the Morgan, MN-based cooperative (507-249-3196).

“For our producers, we want to stand out and be easily recognizable, especially if there is an emergency,” explains Guggisberg. “We always talk about building a team at Farmward Cooperative. Part of a great team is being identified as a great team, and high-visibility clothing helps us in that regard.”

The Occupational Safety and Health Administration Standard (CFR 1926.200 and 1926.201) requires high-visibility clothing for any workers who must work near traffic. While these standards are specific to the construction industry, OSHA’s General Duty clause could be cited to extend such protections to grain facilities, says Joe Mlynek, president of Progessive Safety Services, LLC and content expert for Safety Made Simple.

We have a lot of large equipment rolling into our driveways, and we want to be more visible any time we are working around traffic, like trucks and trailers, or equipment like payloaders and skidloaders.

In 2017, there were 313 pedestrian worker fatalities, according to the U.S. Department of Labor Bureau of Labor Statistics. Nearly half occurred in just a few occupations: heavy and tractor-trailer truck drivers, construction occupations, and grounds maintenance workers.

“The ability to distinguish workers from the work environment is important anywhere there is vehicle traffic (truck, rail, or industrial mobile equipment),” says Mlynek.

Mlynek emphasizes that high-visibility clothing must work in concert with a well-developed plan for vehicle traffic patterns, pedestrian walkways, vehicle work zones, trained spotters, and employee education in these areas.

“We have a lot of large equipment rolling into our driveways, and we want to be more visible anytime we are working around traffic, like trucks and trailers, or equipment like payloaders and skidloaders,” says Guggisberg, a 20-year employee of Farmward, who has spent the past 10 years as safety manager.

Farmward, which operates grain, agronomy, energy, and feed operations at 12 sites, switched to Class 2 high-visibility clothing over a year ago for about 50 of its grain workers, corresponding to their duties in higher-traffic areas. Additionally, these employees often work early mornings and nights, when darkness adds another element of risk, says Guggisberg.

Trafficked areas aren’t the only place the clothing’s value shines, either.

Guggisberg remembers an instance in which he was serving as the attendant during a confined space entry for two other workers. One was wearing reflective clothing, while the other was not. The only light was from the open top and side manways of the 500,000-bushel tank.

“Even in almost zero light, I could clearly see the one guy in high-visibility clothing, but I couldn’t see the other worker. That reflective striping was like a mirror,” he says.

The goal for Farmward is that all its employees understand when high-visibility clothing is appropriate and necessary, says Guggisberg.

The cooperative currently is writing high-visibility clothing rules for all of its employees, he says. Not everyone is always in a position at the coop’s facilities that would require the clothing, which comes in all manner of styles for vests, shirts, coats, pants, and hats that feature the coop logo, he says.

“We’re trying to get a policy that fits for everyone: who needs to have it, who needs it to be mandatory, and when it should be used,” he says. “Our senior leadership doesn’t put a price on safety. We provide the tools for all of our employees to remain safe.”

From the January/February 2020 GRAIN JOURNAL